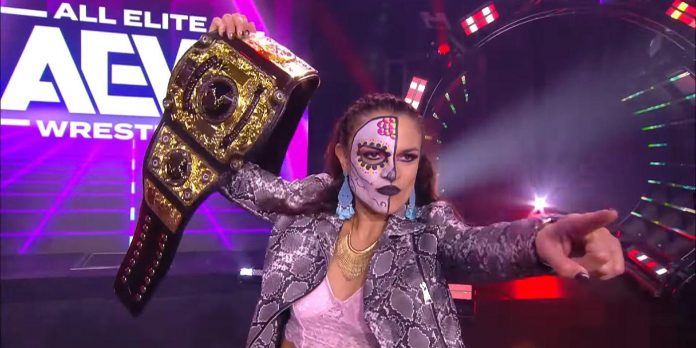 At AEW x NJPW: Forbidden Door, Thunder Rosa will defend her AEW Women’s World Championship against Toni Storm. Since winning the title from Dr. Britt Baker, D.M.D., “La Mera Mera” has been an unstoppable champion. But in Toni Storm, Thunder Rosa faces her top contender who also has tons of experience wrestling all over the world.

Rosa vs. Storm at Forbidden Door is the only women’s match in this inter-promotional event between All-Elite Wrestling and New Japan Pro Wrestling.

Related: AEW x NJPW Is Missing This One Major Component

Screen Rant had the pleasure of interviewing Thunder Rosa about her title defense against Toni Storm at Forbidden Door, her thoughts on her yearlong feud with Dr. Britt Baker, her love of cosplay and X-Men, and what action movie she wants to see rebooted.

Screen Rant: You’re defending the AEW Women’s World Championship against Toni Storm at Forbidden Door. You’re also the only women’s match on the card. Do you feel extra pressure to steal the show?

Thunder Rosa: What do you think? I mean, I’m used to this kind of pressure. And I’m pretty sure [the pressure] isn’t new to Toni. We are ready for it.

Toni Storm came into AEW with a lot of credentials. She’s wrestled all over the world and won lots of championships. Can you talk about what kind of match you expect against Toni and how you’re preparing for her?

Thunder Rosa: I expect a very fun and hard-hitting match with her. We both come from a very similar background. We both worked in Japan at different times. I expect myself to have a lot of fun. I love challenges, and Toni is another big challenge for me.

I also think that Toni Storm hasn’t quite been able to show her full potential in AEW yet. I feel like you’re the perfect person to deliver a Match of the Year-level match with her.

Thunder Rosa: I hope so. It’s gonna be hard to top the match I had with Serena [Deeb at AEW Double or Nothing]. A lot of people said it was the match of the night. But because of who Toni and I are, I think [Forbidden Door] will be just as good.

Forbidden Door is a stacked card. A lot of dream matches. Outside of your title defense, what matches are you personally looking forward to at Forbidden Door?

Thunder Rosa: Man, there are gonna be so many spots. I just wanna see what these crazy guys will do and what they have in store. What crazy spots they’re gonna do, who’s gonna be bleeding… I don’t know. It’s gonna be insane! It’s insanity. I’m excited.

Of course, you defeated Dr. Britt Baker for the AEW Women’s Title, and you’ve been in two classic, brutal hardcore matches. You both really elevated the AEW women’s division, and I feel you put it on the map. Looking back, what are your thoughts about your yearlong feud with Britt Baker?

I saw today you shared the cover of Pro Wrestling Illustrated on social media of you and Jade Cargill, who is, of course, the TBS Champion. You’ve faced Jade before, but would you like to do it again, champion vs. champion?

Thunder Rosa: Of course! Why wouldn’t I?

Thunder Rosa: Why not? Why not?

Looking ahead as Women’s Champion, do you have any dream matches or opponents you’re chomping at the bit to get in the ring with?

Thunder Rosa: There’s an open challenge for any women who are willing. If they feel like they have the skills to step up with La Mera Mera, honestly, I’m ready for anybody as the champion.

I also want to ask about your cosplay, which has been awesome. You’ve cosplayed as Laura Kinney’s Wolverine, the Bride from Kill Bill… Who else do you plan to cosplay as?

Thunder Rosa: Yeah, there’s a bunch. I think I wanna do Black Widow at one point. Also Phoenix. There’s other characters from other movies. I’m not sure yet. I’m working with my gear maker and we’re thinking about what we want to do.

What’s the last movie you loved?

Thunder Rosa: My God. Last movie? I haven’t been to the movies in so long. I barely watch TV. I want to see Top Gun [Maverick]. And I would like to see a reboot of G.I. Jane.

Thunder Rosa: I would shave my hair, I don’t care. I was watching [Demi Moore] in that, and she was training and kicking butt, [but] people were doubting her. She never gave up. I was like, “It’s so empowering.” It’s such a good movie.

I assume you read comics. You’re so inspired by Marvel.

Thank you so much for speaking with me. I’m so excited for your match at Forbidden Door.

Thunder Rosa: Thank you so much. I’m really excited too. Don’t forget to tune into Forbidden Door.

The biggest Minecraft updates since launch

Star Trek: Picard Season 2: What we suspected about the cameo...