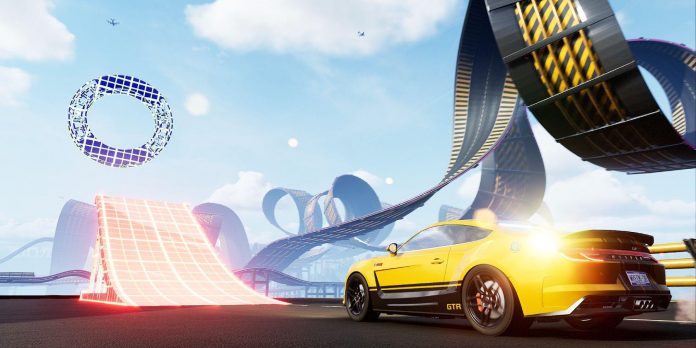 More than a dozen upcoming games were presented at the THQ Nordic Digital Showcase 2022 event on Friday. The upcoming releases were incredibly diverse, but the announcement of Wreckreation stood out among the unique offers. Wreckreation is a sandbox racing game developed by Three Fields Entertainment. Although the release date of Wreckreation has not yet been determined, THQ Nordic has confirmed that it is planned for PlayStation and Xbox consoles, as well as for PC.

Wreckreation is essentially a racing game. However, this is not just a racing game. The basis of Wreckreation is an open world map with an area of 400 square kilometers called MixWorld. Each player will have their own MixWorld in which they can “create, shape—and destroy.” This sandbox will allow players to drive and race, creating races, stunts and whatever they want. Jumps, loops, half-pipes and even moving obstacles can be placed all over the world and even high in the sky.

It would be pretty lonely to create a Wreckreation map full of intense racing events and then not be able to share it with friends. That’s why Three Fields Entertainment has integrated multiplayer into Wreckreation in different ways. Players will be able to compete with each other, visit the worlds of friends and other creators, exchange designs, etc. There is even a leaderboard system for several different racing game modes, including Drift, Air, Near Miss, Stunt, Crash and Time modes.

The developer of Three Fields Entertainment brings his experience to the development of Wreckreation, which also costs nothing. Three Fields is perhaps best known for its unusual sports game Dangerous Golf, although its unique Danger Zone series, inspired by the Burnout Crash mode, also deserves recognition. However, Wreckreation seems to be the team’s biggest game, so this will really be a test of Three Field’s potential.

As already noted, Wreckreation does not currently have an announced release window. Those who want to learn more can subscribe to THQ Nordic on social networks or add the game to the Steam wish list. Expect more news in the coming months, but it could be until 2023 before a deeper look at Wreckreation becomes available.

Wreckreation is in development for PC, PS4, PS5, Xbox One and Xbox Series X/S.

Miss Marvel: 9 Hints the series Gives about the Future of...

Doctor Who: The K9 Story