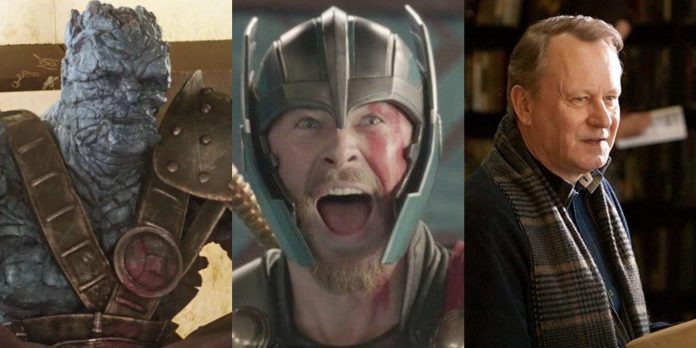 Thor is not always an easy god to get along with. He can be arrogant and reckless at times, but as he proves with his mighty hammer, he is also a worthy hero. And whether he is off saving the day on Earth or battling villains on Asgard, Thor has managed to make some great friends throughout his journey some of which he reteams with in Thor: Love and Thunder.

Some of these relationships began in his days on Asgard, others formed out of the Avengers, and in some instances, Thor turned enemies into friends. From fighting together in battle to dealing with personal struggles to just having fun, Thor is lucky to have friends like these.

When Thor and Iron Man first meet in The Avengers, they quickly end up fighting each other. Given the egos of the two heroes, that is not too surprising. But as with the rest of the Avengers team, they learn to get along.

RELATED: 10 Memes That Perfectly Sum Up Iron Man As A Character

It is clear with both of these heroes that there are other members of the super team they feel closer two. But after going into battle so many times together, it is clear that some bond has formed between them.

When Groot reappears in Avengers: Infinity War, he has grown into a teenage version of himself who is not entirely pleasant. He has a bad attitude and barely interacts with anyone, but Thor manages to inspire him.

After Thor nearly kills himself to build the Stormbreaker axe, Groot gives him his own arm to use as the handle. That helps to bond the two heroes quite quickly as Thor then introduces Groot to Steve Rogers as his new friend – even if he does simply call him “Tree.”

While Korg quickly became one of Thor’s best friends, his own friend Miek was another memorable member of their band. The bizarre-looking alien with knives for hands doesn’t speak which causes him to be somewhat overlooked, but he is still there for Thor.

Not only does he help with the battle against Hela, but he is also by Thor’s side, along with Korg, during his breakdown. Miek is proof that a good friend doesn’t need to say much to be helpful.

There is a hilarious rivalry that emerges between Thor and Star-Lord when the two meet in Avengers: Infinity War. Thor is a little pushy and Star-Lord can be a little jealous so they don’t seem like they will mesh well together.

But Thor: Love and Thunder catches up with Thor as a powerful member of the Guardians of the Galaxy where their friendship seems to have grown. Thor still might look down on Star-Lord to an extent, but it is more in a little brother way. Star-Lord also seems genuinely impressed by Thor as a warrior and even gives him some solid advice about finding his way.

The first time Thor and Darcy met, she tases the God of Thunder which isn’t a great start to any relationship. However, Thor seems to get over that fairly quickly and Darcy clearly doesn’t see him as a threat, allowing them to form a friendly bond.

RELATED: 10 Best Characters In The Thor Franchise, According To Ranker

Their relationship isn’t based on any deep connections and they don’t seem terribly close with one another. But they enjoy each other’s company and have cute conversations like Darcy asking, “How’s space?” and Thor replying, “Space is fine.”

Though the Warriors Three obviously are made up of three different characters, the movies don’t really give them much to do as individuals. So Fandral, Hogun, and Volstagg are lumped together as Thor’s good friends and fellow warriors on Asgard.

Despite not getting much to do in the Thor trilogy, these three characters prove themselves to be very loyal friends to Thor. They follow him into Jotunheim to pick a fight with the Frost Giants and are even willing to disobey their king in order to go to Earth to save Thor.

Lady Sif is another underused character in the MCU. But even in her limited screen time, Sif is a key ally to Thor. There have even been hints of a romantic relationship between these two which appears to have been abandoned.

But even without the romance, Sif and Thor are very close. They go into many battles together with Sif even leading the forces when Thor isn’t there. And while Sif is known to go on her own adventures, she counts Thor as someone who always supports her.

It is interesting that Thor has two very different relationships with Hulk and with Bruce Banner. His friendship with Hulk can be fragile at times as they have battled each other and argue often. But they also share a connection as warriors and Hulk even opens up about his anger issues to Thor.

RELATED: The 10 Best Character Arcs In The Thor Series

On the other side, Thor and Banner don’t seem to have as much in common, but they become closer while trapped on Sakaar together. By the time Smart Hulk appears in Avengers: Endgame, Thor welcomes this combination and sees him as a true friend.

Erik Selvig is one of the smartest characters in the MCU and a key person in Thor’s journey to becoming a more grounded hero. Though Erik is skeptical when Thor claims to be the God of Thunder, he eventually sees him as a good person.

Erik is also a father figure to Jane Foster and Thor clearly respects how much Erik looks out for her. Whether Thor is saving Erik from Loki’s spell or seeking out Erik’s guidance, these two have found themselves on many world-saving adventures together.

Though Thor sometimes seems like an outsider among the rest of the Avengers, he does share a kinship with Steve Rogers. Thor and Steve aren’t as smart as some of the other heroes like Tony and Bruce, but they are soldiers and respect each other for that.

Along with fighting side-by-side many times, these two have some nice moments together. From Thor sharing his Asgardian liquor with Steve to teasing Steve for copying his beard to being proud to see Steve lift Mjolnir, they form a brotherly bond.

The meeting between Thor and the Guardians of the Galaxy was very memorable and resulted in some great moments among the characters. But as funny as Thor’s rivalry with Star-Lord was, his fast friendship with Rocket was even more entertaining.

Even though Thor refers to Rocket as a rabbit, these two take a liking to each other almost immediately. Rocket shows a surprising amount of heart in their friendship as he tries to comfort Thor after Loki’s death and tries to snap him out of his anxiety during the “time heist.”

Korg seems like the kind of character who could become best friends with just about everyone he meets. He is a very friendly and upbeat rock monster who Thor meets on Sakaar and instantly became one of the funniest MCU characters. Though their personalities seem very different, they surprisingly share a somewhat immature view of the world.

RELATED: Where Each MCU Returning Character Left Off In Thor: Love and Thunder

Along with Korg helping stage a revolution in Sakaar and accompanying Thor to save Asgard, these two remain close even during Thor’s darker times. Korg is there to hang out with Thor as he laments and drinks while Thor sticks up for Korg when he’s bullied while playing games.

The relationship between Thor and Loki has been complicated to say the least. When Loki makes his move for the throne, he begins a much more villainous path that puts him at odds with Thor and even tries to kill him on occasion.

Yet it is hard to deny the connection they share. Even after learning that they are not real brothers, Thor still looks at Loki this way and roots for him to redeem himself. For Loki, Thor has been the only one who has stood by him. By the time he dies at the hands of Thanos, Thor and Loki have reforged their bond.

After Heimdall is killed by Thanos, Thor refers to him as his best friend. While that does seem a bit surprising, it’s hard to argue with the God of Thunder. Certainly, these two were very close even if Heimdall always seems too focused on his job to have any real friends.

Still, Heimdall seems to recognize Thor’s potential as a great leader and helps him with some of his rebellious adventures while also given him much-needed advice. They both see the protection of Asgard as the most important thing and work together to do whatever they can to see that achieved.

Though Thor and Valkyrie met as enemies, it was only a matter of time before they were joining forces to save the day. In a short time, Valkyrie established herself as one of the MCU’s best characters and Thor’s most reliable ally.

They are very effective in battle together, but they also support each other in times of need. They both help each other overcome their past losses and continue to be the heroes they were meant to be. It’s no surprise that Thor chooses Valkyrie to be the new ruler of Asgard.