Home Entertainment Thor: The 10 Best Asgardians who are not yet in the MCU 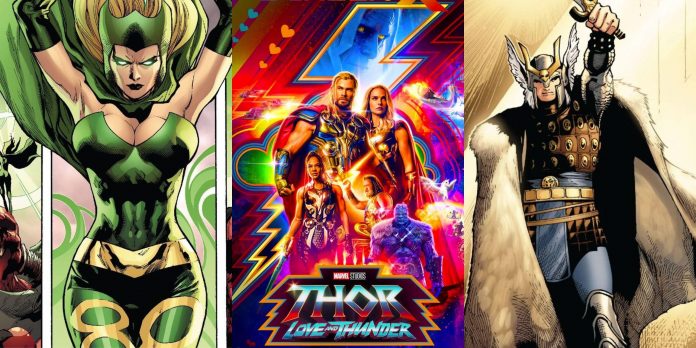 The Asgardians seem to have finally bounced back following the loss of their home in Thor: Ragnarok and their near eradication in Avengers: Infinity War. Under King Valkyrie’s leadership they have recuperated and their new home on Midgard, New Asgard, has become a vibrant hub mixing their ancient cultures with earthly modernism.

Thor: Love and Thunder introduced several great members of the next generation, such as Heimdall’s son Axl and Thor’s new daughter, Love. However, there are still some important and interesting Asgardians who have yet to appear in the MCU, and perhaps they can come into play sometime soon.

When it comes to Thor villains, it’s hard to get better than Loki, Hela, and Gorr the God Butcher, but they could still introduce Amora the Enchantress. She’s been a consistent adversary for him, Loki, and the Avengers, and on top of being an Asgardian, she’s a master sorceress, with a special proclivity for seduction and persuasion.

Sophia Di Martino already plays an adaptation of the second Enchantress in Loki, so she might take on the Enchantress moniker going forward. However, if not, then it’s high time for Amora to be in the MCU. Perhaps she was actually optioned for Thor: Love and Thunder and was being played by Lena Headey, whose cut role remains a mystery.

When he was first introduced in Thor, the MCU largely simplified his origins and family, making him and Loki Odin’s only children. Of course, that was upset by the reveal that Hela is their long-exiled older sister. However, in the comics, Thor has several siblings including Balder, Tyr, Hermod, Angela, Laussa, and Vidar. Balder is a consistent figure as an ally to his brother and his fate was intertwined with Ragnarok.

Apparently, he was once considered to be part of the Illuminati in Doctor Strange in the Multiverse of Madness. Though it would require changing his origins and/or parentage, it would still be nice to see Balder in the MCU. This could feature him temporarily replacing Thor – or Valkyrie in this case – as King of Asgard, or even his recent run leading the Babysitter’s club. However, the safest bet might be to see him alongside Jane Foster, Heimdall, and Sif’s arm in Valhalla.

Cate Blanchett was utterly fantastic as Hela in Thor: Ragnarok, but part of her backstory was taken from a real daughter of Odin, Angela. She is a relatively new arrival in Marvel Comics, having spent two decades fighting Spawn in that series until she crossed over to Marvel in 2013. She was then established as Thor’s long-lost sister. While Hela descended to Hel, Angela rose to Heven, being raised and trained as an assassin by the angels.

Regardless, of the complications provided by the MCU’s existing limitations, Angela would still make a fantastic new entry into the MCU. Importantly, she is one of the best LGBTQ+ heroes – so perhaps she could fulfill the promise made years ago as Valkyrie’s love interest.

Thor: Love and Thunder’s mid-credits stinger reveals Brett Goldstein as Hercules, who is then sent on a mission to hunt down Thor, presumably setting up Thor 5. Yet it still doesn’t seem likely that Hercules would end up as the true antagonist. As is standard for a Thor film it could involve some family drama and therefore, his uncle Cul Borson could take up that villainous role.

He also goes by the name Serpent and is the God of Fear, which could perfectly continue playing off the scary aspects Gorr the God Butcher provided in Thor: Love and Thunder. As part of his planned takeover of the world, he possessed several characters including Hulk, Titania, and the Thing to serve as his fearmongering warriors. This could be applied to Thor’s remaining allies like Valkyrie or Korg.

As shown in the thrilling flashback sequence in Thor: Ragnarok, Tessa Thompson’s Valkyrie is the last of her kind. Her sisters and her mysterious lover were all cut down by Hela. However, now that she’s seemingly recovered from her trauma and revitalized New Asgard as the King, perhaps her next endeavor should be to rebuild the Valkyior, which could introduce Hildegarde.

She has an important history with Thor because she was just his friend and ally. Jane Foster and Lady Sif were the two most prominent female characters in Thor’s story at the time, and both were love interests, so that set Hildegarde apart. Like any Valkyrie, she’s incredibly adept at fighting, so much so that Thor for a time suspected she was the mysterious Mighty Thor. Should Thompson’s Valkyrie get her much-deserved solo project, Hildegarde should be incorporated – either from the past or in the present – and even Jane Foster could come along for the ride.

Throughout Thor: Love and Thunder there were several different wolf-related characters – including the wolf-lady played by Chris Hemsworth’s wife Elsa Pataky. These inclusions could be a reference to characters like Werewolf by Night or even Hrimhari, a relatively unknown Asgardian werewolf. He is descended from Fenris, the giant monstrous wolf seen fighting Hulk in Thor: Ragnarok.

Interestingly Hrimhari’s story in the comics actually relates him to mutants and the X-Men more than Thor. He falls in love with Rahne Sinclair AKA Wolfsbane, and they have a son, Tier. In the continued exploration of New Asgard in Marvel, it would be exciting to see him feature in a way.

Now that Asgardians have found a home for themselves on Earth, that allows for some interesting storylines exploring their relationship with humanity. As such, hopefully the next foray into this part of the MCU will be announced soon, and maybe it could involve Kelda in a way. She was unique among the Asgardians for venturing through the world of humans, during which she meets a fry cook in Oklahoma named Bill Cobb.

They fell in love and Bill moved to live with her and her people, who were currently residing in Doctor Doom’s home country of Latveria following Ragnarok. Their love story would make for an interesting secondary story in a Disney+ series focused on Lady Sif and/or Valkyrie. Additionally, she’d make for a great ally in a fight since she can summon a deadly poisonous spear out of thin air as Hela did.

Another way to showcase Asgardians among humans is by introducing Sigurd. Even for Asgardians, he’s an ancient warrior, having served under Odin’s father, Bor. He is best recognized in mythology for fighting and slaying the dragon Fafnir with his sword, Gram. There are now two legendary blades in the MCU with the Ebony Blade in The Eternals and the Necrosword in Thor: Love and Thunder, so maybe a third’s in order.

Importantly, he actually settled down on Earth long before Ragnarok forced Asgardians to move there. It could be interesting to see a character like this, having grown accustomed to his life among humans, only to be dragged back into a conflict. Otherwise, he could be adapted to be a young warrior in New Asgard who is tasked with slaying a dragon that found its way to Earth, or his story could be applied to another character.

Asgardians are but one of the many beings in the nine realms, and while Asgard has been destroyed it is unclear what happened to the likes of Vanaheim and the Vanir. While Odin’s father founded the Aesir, his uncle, Njord, founded the Vanir, and when those people merged, they became the Asgardians. Among the Vanir is Idunn, who holds an important part in mythology and the comics as the keeper of the Golden Apples.

These are supposedly responsible for granting long life, something that would be incredibly coveted by humans on Earth. She wouldn’t need to be identified technically as a Vanir, but she could come into play in a way to explore how New Asgardians find their inherent power and strength in a new realm. Perhaps some of these Golden Apples or related items are stolen, so Sif and/or Valkyrie must seek them out, and Idunn joins in the hunt.

Though Thor: Love and Thunder had continued in integrating mythology and the gods into the MCU – with the introduction of Toothgnasher, Toothgrinder, and Eternity – it still seems like Thor’s story is being set up as a space-faring adventure. Hopefully, future installments for him or related characters can still examine the intricacies and mysteries surrounding the mythology in the comics, such as by bringing in Karnilla.

She is the Queen of the Norns, Goddess of Destiny, and an incredibly powerful and dangerous sorceress. Karnilla was responsible for training Amora the Enchantress and was even in a relationship with Balder the Brave. She and the Norns would help make these stories even more mystical and could thus make for a compelling and fascinating antagonist.