Home Entertainment Thor makes a speech (or tries to) in the new “Love and... 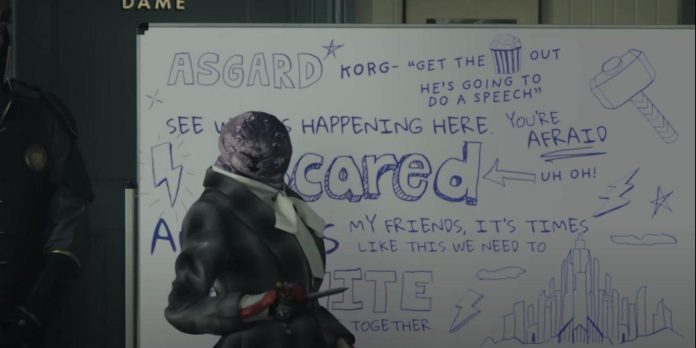 Now that tickets for the upcoming movie “Thor: Love and Thunder” are available for purchase, Marvel Studios has unveiled a new teaser, creating even more excitement around the upcoming fun adventure. In the newest trailer, many unprecedented clips have been released, allowing fans to better understand what will be released on the big screen in a few weeks when “Thor: Love and Thunder” is released in theaters.

The film also reintroduces a fan-favorite character who hasn’t appeared in any commercials yet: Mick. Korg’s little insect friend is back, but instead of blades, he uses a dry erase marker and takes notes while Thor tries to wake up the crowd with an exciting speech.

RELATED TO: Thor: Love and Thunder – 7 Things about Gorr, the Butcher God that Only Marvel Comics Readers Know

The trailer for the film, which will be released in theaters on July 8, includes many dynamic shots in which Thor (played by Chris Hemsworth) delivers a speech in front of the Asgardians in the background. The trailer includes previously released footage of the Mighty Thor/Jane Foster (played by Natalie Portman) and Valkyrie (played by Tessa Thompson), but the teaser also includes many new clips. One of the newest clips gives a better idea of the role that the Guardians of the Galaxy will play in the film, depicting a close-up of Star Lord (played by Chris Pratt), Drax (played by Dave Batista) and Mantis (played by Pom Klementieff).

One of the most talked about moments in the first full trailer of the film was a closer look at the film’s big villain Gorr, the butcher god (played by Christian Bale). While the character’s appearance is different from the comics, which fans have discussed as a strength or weakness, Bale seems to make the character truly intimidating. The trailer shows a previously released clip in which Gorr promises “all gods must die”, he fights Valkyrie, and the new one — Gorr and Thor fight each other. During this battle, Gorr wields lightning, and Thor uses his Thunderbolt axe (previously forged when Mjolnir was destroyed, although the hammer will return in this movie).

The new trailer managed to cause excitement around the film, as well as give fans a better idea of what will happen in “Thor: Love and Thunder”. Fans are now waiting for Thor’s newest adventure, which will be released in theaters on July 8, where everything will be revealed when Thor enters his most terrible battle against Gorr, the butcher god.

Cyberpunk 2077: They Detect A New Build After Months Of Inactivity