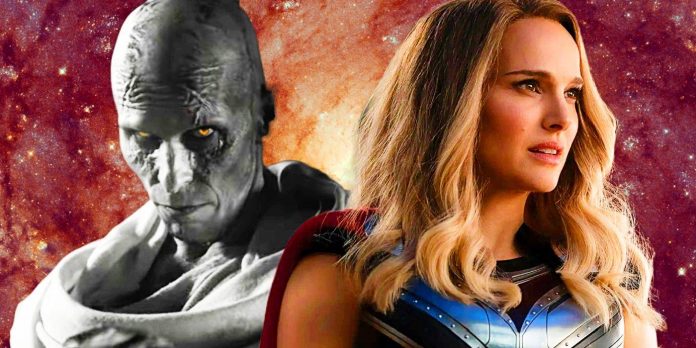 Attention! This article contains spoilers for the movie “Thor: Love and Thunder”.

“Thor: Love and Thunder” has quite a few plot holes and puzzles throughout the execution time and plot. Phase 4 showed that the MCU was growing at a tremendous rate, introducing a wide range of new superheroes that operate at completely different levels of power compared to the original Avengers. Without a doubt, the events of Avengers: Infinity War would have played out very differently if the Eternals had joined the battle against Thanos at that early stage, while America Chavez could have taken the Infinity Stone to where Thanos would never find it.

But not all of the original Avengers are gone. “Thor: Love and Thunder” represents Odinson’s long-awaited return, initially with the Guardians of the Galaxy, but it doesn’t take him long to drop the Guardians and instead focus on his own mission. Gorr, the Butcher God, is rampaging among the stars, killing all the gods he meets, and Thor is trying to assemble a squad of gods to defeat him. In the latest MCU blockbuster, laughter rings thick and fast as Thor races through space and eventually finds himself face-to-face with Eternity, a cosmic avatar representing the universe itself.

The introduction of Eternity means that this is the most grandiose entry in the MCU to date, eclipsing even “Doctor Strange in the Multiverse of Madness”. Unfortunately, the cosmic scale — including the appearance of a villain who makes Thanos look weak — means it raises a lot of awkward, uncomfortable questions about the MCU in general. Here are all the plot holes and vertigo from Thor: Love and Thunder.

The biggest problem is that “Thor: Love and Thunder” unwittingly creates another way Thanos’ flick in “Avengers: Infinity War” could have been undone. Thor knew that there were legends about a being named Eternity, who could be found by going to the very heart of the universe, and who would fulfill one wish of the first person who found him. His decision to arm himself with a Thunderbolt, a weapon so powerful that it can summon a Bivrest, means that he could find Eternity at any time and just wished that the click was canceled. The problem is even more urgent, given that Doctor Strange looked at 14 million futures and stated that the one in which the Avengers used time travel to fix things was the only one in which Thanos was defeated. There doesn’t seem to have been a timeline in which Thor—or indeed any other Asgardian or divine being—thought about Eternity.

Why wasn’t Thanos looking for eternity in the first place?

The existence of Eternity does not seem to be a closely guarded secret in Thor: Love and Thunder. This makes it rather strange that Thanos spent years searching for various Infinity Stones rather than trying to find Eternity. Perhaps at some point he really tried, but just didn’t succeed, not realizing that he needed a Bifrost. On the other hand, it may happen that only the gods know the legend of Eternity, and they do not let the rest of the universe hear it.

Why does Gorr need a necromech to kill God in the movie “Thor: Love and Thunder”?

Christian Bale’s Gorr God-Butcher is a truly terrifying opponent armed with a Necromech — an ancient weapon that can kill even gods. While “Thor: Love and Thunder” certainly presents the Necromech as a powerful weapon, it is unclear why the ability to kill a god is of such great importance. Viewers have already seen many gods die in the main MCU timeline, especially in “Thor: Ragnarok” and “Avengers: Infinity War”, while “What If…?” discovered many other weapons that can kill God. The dialogue suggests that the Necromech has existed since time immemorial, so perhaps it was just the first—and most legendary—weapon that a mortal used against a god.

Did Necrosword turn Gorr into a god in the movie “Thor: Love and Thunder”?

“Thor: Love and Thunder” hints that Necromech actually turned Gorr the butcher-god into a real god. In the film, the Necromech is deliberately compared to Thor’s weapon; the Necromech chose Gorr, just as Mjolnir chose Jane Foster, and at one point there is even a very familiar sound effect when Gorr summons the Necromech. Jane’s transition to Valhalla indicates a form of apotheosis, when a person transcends his humanity and becomes a divine being, which increases the likelihood that the same thing happened to Gorr. This idea is taken from the comics, where the resurrected Gorr family believed in him with such reverent faith that he turned into a god. Gorr, of course, was horrified when he realized what had happened. If the idea is present in the “Torah: Love and Thunder”, then it is really not developed.