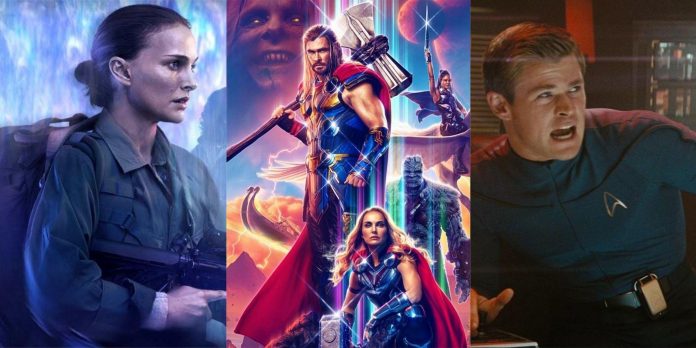 The MCU’s Thor: Love & Thunder is one of this summer’s most anticipated releases, reuniting familiar faces within the franchise but also serving as a commencement for some of Hollywood’s biggest A-Listers. Notably, the film will feature Christian Bale and Russell Crowe, two revered actors whose MCU debut is one of the film’s major attractions.

Individually, the cast of Thor: Love & Thunder has starred in a variety of celebrated films, some of which have achieved high scores on the famed Rotten Tomatoes’ Tomatometer. From Oscar-nominated movies to science fiction cult classics, the cast of Thor: Love & Thunder have proven themselves to be powerful actors beyond the Marvel Cinematic Universe.

While many know him as the Mighty Thor, coincidentally, the highest-rated film outside the MCU for Chris Hemsworth is tied to a different iconic franchise. 2009’s Star Trek, directed by J.J. Abrams, was a reboot of the original franchise and featured many of the iconic original characters, was a critical and commercial success that featured an enormously talented ensemble cast.

Hemsworth plays Captain George Kirk, the father of the famous James Kirk, in a small but important role in the thrilling opening act of the film. Kirk’s final moment with his wife, who escapes the attack, is equally touching and tragic, but triumphant primarily because of Hemsworth’s performance.

Since her iconic debut in the 1994 film, Leon: The Professional, Natalie Portman has starred in all kinds of movies, from small indie films to mega-blockbusters. One may assume that her best-rated movie on the Tomatometer would be 2010’s Black Swan, the movie that won her an Academy Award, but surprisingly, it is topped by Alex Garland’s cosmic horror, Annihilation.

Despite a mixed audience reaction, Annihilation is praised for its Lovecraftian horror visuals and ambitious exploration of complex themes. While the film is led by an ensemble cast, Portman is the standout performance, delivering genuine moments of fear and sadness, resulting in a finale that will leave audiences in awe.

From directing small budget films to helming MCU movies, many of Taika Waititi’s projects have received critical praise, but none more than Hunt for the Wilderpeople.  A story of a city kid who journeys through the dangerous New Zealand bush with his foster uncle, Taika’s acting role may be small, but it’s his direction that truly shines.

RELATED: Every Taika Waititi Film Ranked, According To Rotten Tomatoes

To call Christian Bale’s career prolific may be an understatement. An Academy Award winner and a familiar face to multiple blockbuster films, Bale may be new to the MCU, but he isn’t new to the superhero genre as he is most famously known for his portrayal as the Caped Crusader in Christopher Nolan’s The Dark Knight.

Often cited as Nolan’s best film, The Dark Knight transcended the superhero genre and infiltrated mainstream audiences in a way no other superhero film had done prior to its release. The combination of the cast’s performances with Nolan’s impeccable direction proved to audiences that superhero movies can be more than flashy fights and visuals.

While Tessa Thompson has become a recognizable face in the MCU, she played a pivotal role in Selma, the powerful historical drama that chronicles the famous and tragic march to Montgomery during the height of segregation. Selma reached universal acclaim, even scoring a nomination for Best Picture at the Academy Awards.

Comprised of an ensemble cast that is led by a captivating performance from David Oyelowo as Dr. Martin Luther King Jr., Selma is an incredibly powerful film that both infuriates and inspires. The history may be difficult to face, but Selma reminds audiences of the importance of remembering those who fought for the liberties and rights of the unfairly persecuted.

With over 30 films under his belt and a career that spans back to the early ’90s, fans of Russell Crowe have a plethora of options when choosing their favorite Crowe film. But it’s L.A. Confidential, the gritty neo-noir crime drama, that lands the most universal praise from critics.

RELATED: Russell Crowe & Every Other Actor Who’s Played Zeus In A Movie Ranked

Sometimes unfairly overshadowed by the massive success of Titanic, L.A. Confidential achieves a certain balance that many films that share a similar premise cannot achieve. At times, it is an intense noir thriller, and then at others, an in-depth exploration of sex, lies, and corruption. With deliberate pacing and stellar performances, L.A. Confidential avoids being an overwhelming experience and ventures into an enlightening one.

2014 was arguably the year of Chris Pratt. In July, Guardians of the Galaxy was released, becoming an immediate commercial success and arguably catapulting Chris Pratt into mega-stardom. But earlier that year, he voiced the lead character in The Lego Movie, the computer-animated adventure comedy that would capture the hearts of audiences across the globe.

In a medium largely dominated by Disney, The Lego Movie was also celebrated for its voice acting, self-aware humor, and its incorporation of original songs. While The Lego Movie might be considered a large advertisement for Legos, there was no denying the film’s heart and originality.

While on paper, the premise of American Hustle appears to be on the more serious side- the movie shines because of its flawless cast that delivers a surprising amount of comedy. Add in the groovy ’70s aesthetics with the impressive direction from David O. Russell and you get one of the best movies of 2013.

After a slew of the most iconic comedies of the 2000s, Adam McKay pivoted to a different type of comedy- a biographical dramedy about the economic crisis of 2007-2008. The film starred an all-star ensemble cast that included Karen Gillan and was considered by most as Adam McKay’s best work.

But how does one turn something as somber as the 2007-2008 economic crises into a comedy, let alone explain the intricacies of the collapse of the financial market to audiences that likely have little knowledge of that field? The answer was using celebrity cameos to explain complex terms in a way any average Joe could understand and this is ultimately why The Big Short succeeds where other films about finances may fail.

In many ways, the former WWE Champion’s role as Drax the Destroyer in Guardians of the Galaxy paved the way for a number of opportunities in Hollywood, including a role in the 2017 legacy sequel Blade Runner 2049. 35 years after the original Blade Runner, the sequel continued the story of the replicants, but with a new twist, the androids could now reproduce.

Directed by acclaimed filmmaker Denis Villeneuve, Blade Runner 2049, while a box office a disappointment, was a critical success. Visually stunning and rich in theme, Blade Runner 2049 offered many of the same aspects that long-time fans loved about the original, while also introducing new characters and twists to keep the franchise fresh and reel in new fans to its eerie universe.