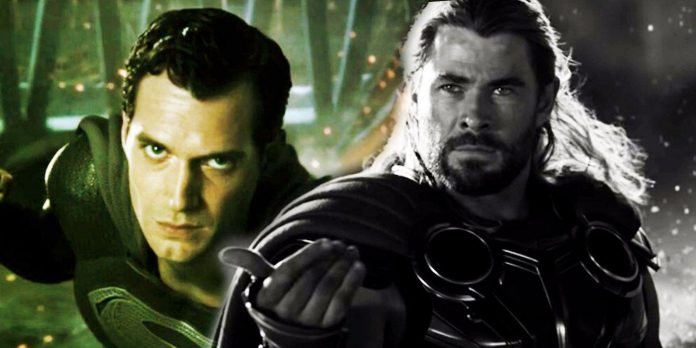 Attention: spoilers for the movie “Thor: Love and Thunder”

An epic scene in the movie “Thor: Love and Thunder” uses a special technique of filmmaking much better than the black-and-white version Zack Snyder’s Justice League. Gorr, the Butcher God, occupies a black-and-white planet in the fourth part of Thor, which makes the Thunder God and his team seem colorless almost throughout the episode. In this episode, director Taika Waititi takes advantage of the colors in a way that puts the Justice League to shame.

A four-hour version of Snyder’s “Justice League” was released on HBO Max in 2021, and was soon followed by a film version done entirely in shades of gray. The director said that the latter, known as “Justice League: Justice Gray,” is his ideal version of the film if it is played in IMAX format, despite the fact that it is broadcast with a 4:3 aspect ratio on HBO Max. No new scenes have been added to Justice Is Grey, so there is no difference between Snyder’s version of Justice League and the monochrome version, other than saturation or lack thereof. The creator of the DCEU film originally intended to demonstrate the majestic intricacies of superpowers with the help of a sharp contrast of black and white, but he abandoned this idea when creating “Justice League” because, as he stated at the time, monochrome would make the film feel “too belligerent”.

Link: Why does Gorr from Love & Thunder Not look like in the comics

Zack Snyder eventually released a black-and—white version of his “Justice League” version of “Justice Is Gray,” and now that decision could backfire. Taika Waititi used various film-making techniques for the monochrome episode of the film “Thor: Love and Thunder” to maximize the effectiveness of the new color correction. Shadows and close-ups become the focus of attention in the MCU release. While “Justice League: Justice Is Gray” feels like a film shot in color that had a gray filter applied at the last minute, “Thor: Love and Thunder” feels cinematic when it’s shot in black and white. Thanks to Waititi’s creative efforts, the coolest scene in the Thor sequel eventually eclipsed the monochrome version of Justice League.

Why Black and White Works for Love & Thunder, But Not for Justice League

The black-and—white assessment of “Justice League: Justice is Gray” does not make it better or worse than the film, and the four-hour epic remains beautifully cinematic even in monochrome. However, he never takes advantage of the technique that films have used as a tool since the days of noir. Taika Waititi’s direction in the film “Thor: Love and Thunder” seems to draw inspiration from noir films as well as German expressionism. Colors in the scene are used sparingly, only for the effective transmission of emotions.

The black-and-white sequence works better in “Thor: Love and Thunder” than in “Justice League: Justice is Gray,” because of such attention to detail. When Jane separates from the group and is left alone on the planet, Taika Waititi uses shadows to create an atmosphere of suspense and mystery. The cinematography changes dramatically when the sequence begins, as the close-up of Thor and Jane holding hands is unlike any other in the saturated parts of the film. “Justice League: Justice is Gray” is unconvincing as a black—and-white film due to the style of directing that meets the criteria of a film shot only in color.

The success of the film “Thor: Love and Thunder” confirmed Taika Waititi as one of the best Marvel directors, and the coolest episode on the black-and-white planet is an indicator of his enduring talent. Zack Snyder’s “Justice League” is an innovative and comprehensive film that deserves a place in the top ranking of superhero films, despite the prosaic performance of the monochrome version. However, “Thor: Love and Thunder” proves that the methods of black-and—white filmmaking can be fully used in superhero films, and as a result, it completely overshadows the efforts of “Justice League: Justice is Gray.”

The Chronicles of Gordita: the main characters in the order of...