Home Entertainment Thor: Love and Thunder — The 10 Most Powerful Hercules Villains in... 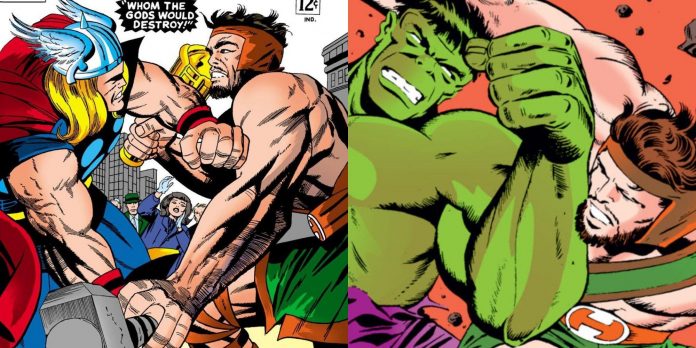 Thor: Love And Thunder introduces Hercules to the MCU with a clear directive: get revenge on Thor for his attack on Zeus. This echoes Hercules’ comic book journey, where he initially appears in Thor Annual #1 as a villain. Thor becomes Hercules’ frequent antagonist in his earliest adventures, but comic book fans know Hercules gains many more villains as time goes on.

Major Marvel heroes like the Hulk count among Hercules’ most powerful villains in the comics, as well as even more powerful figures like Immortus. Hercules fought against Marvel’s most dangerous foes while a member of the Avengers and other superheroic teams, and likely will in the MCU as he joins the ever-expanding live-action universe.

Hercules faced off against The Wrecking Crew on a few occasions, with the most important being the Under Siege storyline. This 1980s sepic ranks among the best Avengers comics storylines ever and sees the supervillain team beat Hercules into a coma. The combined strength of the Wrecker, Bulldozer, Piledriver, and Thunderball makes them very powerful.

This team relies mostly on its incredible strength and stamina, enough collectively to challenge even Hercules, despite his Olympian might. He eventually returns the favor, defeating them all on his own.

The Masters Of Evil

The Wrecking Crew worked in concert with The Masters of Evil during Under Siege, a product of Baron Zemo’s cruel tactical genius. Zemo organized the team in Avengers #6, creating a powerful force the Avengers struggled to contend with time and again. The team includes several powerful members, including Moonstone, with the ability to manipulate gravity on a cosmic scale.

Varying incarnations of the team included the Absorbing Man, among Thor’s most powerful villains in the comics, and Blackout, the Fixer, Goliath, all of whom bring terrific power and ability to the fight.

Hercules fights Namor the Sub-Mariner several times in the comics, including during his earlier stints with the Avengers. Namor possesses superhuman strength, speed, and agility nearly on par with Hercules thanks to his human and Atlantean physiology. Namor also can fly and swim at superhuman speeds.

Namor’s skill in multiple forms of combat as well as his incredible intelligence make him very difficult to defeat, to say nothing of the vast resources he commands as Atlantis’ ruler.

Hercules tests his god-like strength against the Hulk in Tales to Astonish #79, in a battle for the ages. The Hulk ranks among the most powerful Avengers in the Marvel Universe with extraordinary strength derived from his exposure to gamma radiation. The Hulk holds up mountains and destroys asteroids with ease.

The Hulk’s incredible stamina also rendered Hercules’ Olympian might pointless in their battle. With either unable to suffer true injuries, the battle ended in a stalemate, though not without collateral damage.

Ares serves as the God of War and ranks among the most powerful Olympian gods in the Marvel Universe. Ares possesses god-like strength and stamina as well as effective immortality. He also commands weapons from every period in human history, as well as the Gauntlets of Ares, which made him as strong as Hercules.

Ares’ ability to sow dissent and conflict among people, creating war, makes him incredibly dangerous. Even his own people struggle to resist his warmongering and manipulative tactics.

During Civil War, Iron Man created Ragnarok, a Thor clone with most of the Asgardian’s powers and abilities. This cybernetic clone retained Thor’s extensive knowledge, as well as his incredible strength, stamina, and immunity. He also wielded a powerful hammer, though this weapon didn’t possess the mystical enchantment or properties Mjölnir does.

That meant anyone could pick up the hammer and Hercules used it to destroy the clone in an epic battle, dispatching the misguided construct with the brutal like “Thou art no Thor.”

Hercules and Thor fight in many iconic Thor comic book panels, with their first battle occurring in Thor Annual #1. Several more followed, proving them to be more or less equals. Thor’s Asgardian physiology rivals Hercules, and with Mjölnir, Thor gains even more power, including the ability to summon lightning, control the weather, and more.

Thor also at times possesses even greater power. In recent comics, he gained the Power Cosmic as the herald of Galactus, and with it killed the nearly omnipotent cosmic entity with relative ease.

Hercules fights and kills Kly’bn during Secret Invasion, among the most important Marvel Comics events ever. The Skrull god nonetheless represents a powerful foe as a Skrull Eternal. Kly’bn possesses superhuman strength and endurance on par with the Eternals from Earth, along with the ability to shapeshift into any form he wishes.

His strength matches Hercules and he also generates energy blasts from his eyes and hands that would kill normal humans. Hercules eventually defeated him with the help of Snowbird, by impaling Kly-bn with the bone of an Elder God.

The Eternals all share god-like strength similar to Hercules’, as well as effective immortality. Their ancient knowledge and highly advanced technology, derived from the Celestials, among the most powerful cosmic beings in the Marvel Universe, makes them gods themselves.

The Eternals once claimed Olympus during The Celestial Saga, forcing the displaced Olympians and Asgardians to join forces to oust them. This epic battle took all Hercules’ strength and wit and potentially plays out in the MCU now that both the Olympians and Eternals are in live-action.

Hercules likely faces many powerful villains in the MCU, and the most powerful could be Immortus. Immortus possesses unrivaled knowledge derived from the Time-Keepers and power as the ultimate future form of Kang The Conqueror. Armed with advanced technology from the 40th century and beyond, he manipulates time on a scale most can’t even perceive.

He manipulated Hercules into fighting the Avengers in The Avengers #10, pulling Hercules from the ancient past to fight Thor.  Immortus also later took control of the Scarlet Witch in a bid to exploit her power as a Nexus Being, proving how dangerous he truly is.