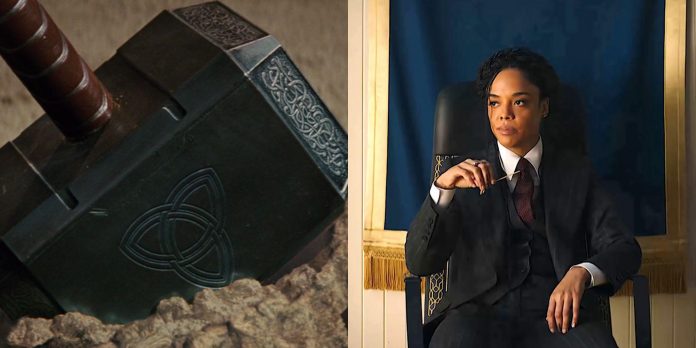 The latest entry in Phase Four of the Marvel Cinematic Universe, Thor: Love and Thunder, pits the god of thunder and his impressive team against a murderous villain, Gorr the God Butcher. As usual, there is no shortage of references to Norse mythology, as way before the comics, Thor’s story has been told alongside mythos about characters like Loki, Sif, and Heimdall, just to name a few.

Alongside major Easter eggs that referenced comic books, creators, and other MCU movies, there are some items, characters, and even animals that are obviously inspired by Norse mythology. A quick online search or a deeper dive into sources like Snorri Sturluson’s Eddas will confirm that Love and Thunder is heavily rooted in established lore.

When Thor, Valkyrie, Jane, and Korg’s group decide to visit Omnipotence City to raise an army of gods, they realize they can’t rely on Stormbreaker’s shaky Bifrost or Valkyrie’s singular winged horse to get them there. This prompts a sequence that shows them clearing up the Viking ship that has been used as an amusement park ride for quite a while in New Asgard.

Viking ships have an important place in both Norse mythology and history, as they were used for several functions like cargo transport, exploration, and warfare. In the mythos, the Naglfar is a crucial part of the events of Ragnarok, as it carries monsters meant to join in the battle against the gods.

Love and Thunder depicts Jane’s heartbreaking death in Thor’s arms, which soon turns into a hopeful moment after her body seems to turn into gold dust that drifts up to the sky. Something like that happens in Thor: Ragnarok, where the protagonist’s father Odin makes his way to Valhalla in a similar manner.

Earlier in the film, Valkyrie mentions that Jane turned into a Viking because Mjolnir chose her. It makes sense that she would be granted access to Valhalla, which is actually shown in the post-credits scene. Descriptions of it vary, but Valhalla is known as the place warriors who die in battle go – they’re carried by the valkyries to reach the majestic halls where the god Odin waits.

The Asgardian warrior Sif plays a minor but important role in the movie, as she warns Thor about Gorr’s plans of attacking New Asgard. It’s not the first time she has helped the god of thunder, as she has been there for him since the attack of the Frost Giants all the way to the fight against Thanos.

There are some differences between mythos about Sif and the MCU’s portrayal of her, with the most glaring one being that she gets so much screentime. In the Poetic Edda, she only says one line and is mostly known in Norse mythology for her role as Loki’s victim in a mean-spirited prank that causes her to lose a lock of her hair (referenced in the Disney+ series).

An intense scene takes place when Gorr manages to restrain Thor, Jane, and Valkyrie in the Shadow Realm. The villain taunts Valkyrie by bringing up the death of her sisters during their difficult fight against Hela. He asks her if she cried for her fellow Asgardian warriors and begged her god then, implying that she understands the pain that he feels.

King Valkyrie (aka Brunnhilde) is inspired by a mythological figure, Brunhilde, who defies Odin and is punished for it. The Valkyries, unlike their depiction in the Marvel films, are more known for carrying fallen warriors to Valhalla and not fighting their wars for them.

Right before they take off on their renovated Viking ship, Thor predictably gives a rousing speech that ends with a promise of bringing home the kidnapped children. At one point, he proclaims that they will fly with the speed of Odin’s ravens, which could be a reference to his father’s familiars, Hugin and Munin.

These are crucial animals in Norse mythology, with Huginn and Munnin being loyal servants to the Allfather. ‘Huggin’ means ‘thought’ and ‘Munnin’ translates to ‘memory,’ which relates to their main job for Odin – to fly across the Nine Realms and collect important information to report back to him.

Heimdall And His Son

Heimdall’s tear-jerking sacrifice is still one of the most unforgettable scenes in Thor’s story so far – his appearance in the post-credits scene is a reminder of that. It’s amazing to see Love and Thunder introduce his son Axl (formerly known as Astrid), who is continuing his father’s legacy. Axl even learns to do what Heimdall once did with Thor, allowing the protagonist to project himself to the kids’ location.

The mythos around Heimdall is similar to his role in the franchise, as he’s known as the guardian of the Bifrost. It’s worth noting that he’s actually one of Odin’s sons in Norse mythology, making him Thor’s brother. As for Axl, while Heimdall doesn’t have a wife, there is lore about his numerous anonymous children with humans.

The low-budget play shown to tourists in New Asgard is a fun callback to the ones that used to be performed in front of Loki (masquerading as Odin). This time, there’s an updated story that shows Thor and Loki going through the loss of their father and then meeting their evil sister Hela for the first time.

This is surprisingly the god of mischief’s only appearance in the film (he may still be dealing with the TVA), but it’s worth delving into his role as a trickster among the Norse gods. Their family tree is jumbled compared to the MCU’s version, as Loki is actually Hel’s (Hela) father and is not Thor’s brother. He also has a bigger role in Ragnarok, which starts because of his actions.

Another mythological figure portrayed in the comical play in New Asgard is Hela (or Hel). She appears onstage in a dramatic fashion, as she pierces through a portal made of fabric and implores her brothers to join her on her murderous mission.

Loki is Hel’s father in Norse mythology. She grows up to become the goddess of death and ruler of the eponymous realm or the world of the dead. The terrifying place is said to exist beneath the roots of the world tree Yggdrasil and houses Hel’s mansions complete with servants, which is a far cry from what unfortunate souls will see and experience when they reach the underworld.

A heartwarming scene in Love and Thunder explains exactly why Mjolnir called out to Jane to transform her into the Mighty Thor. The flashback shows Thor whispering to Mjolnir as Jane sleeps, asking the weapon to promise him that it will take care of her no matter what. After he stands up, the symbol on it glows as if to respond to his request.

The symbol on Mjolnir is an interlaced double triquetra, which is commonplace in artifacts from the Viking world. Its true meaning is, unfortunately, lost to time, as there is a myriad of interpretations ranging from paganism to Christianity that could be attached to it. It’s impossible not to spot it at least once in depictions of Mjolnir based on Norse mythology, though.

The two giant goats that Thor receives as a gift for bringing back peace to a community have quickly become fan-favorite animal characters. Toothgnasher and Toothgrinder’s hilarious bleating injects humor into any scene, and they even prove themselves as warriors when they defend Korg and fight Gorr’s shadow creatures.

In Norse mythology, the two goats are called Tanngrisnir and Tanngnjóstr, the old Norse translation of their names in the film. Instead of pulling a Viking ship, they pull Thor’s chariot throughout the nine realms. There’s also a witty joke in Love and Thunder where the protagonist threatens to turn them into “meat” if they don’t shut up – this could be a reference to how in the mythos, Thor occasionally eats the goats and even shares them with others, only to revive them again the next day.