Home Entertainment “Thor: Love and Thunder” speaks about the freedom of creativity 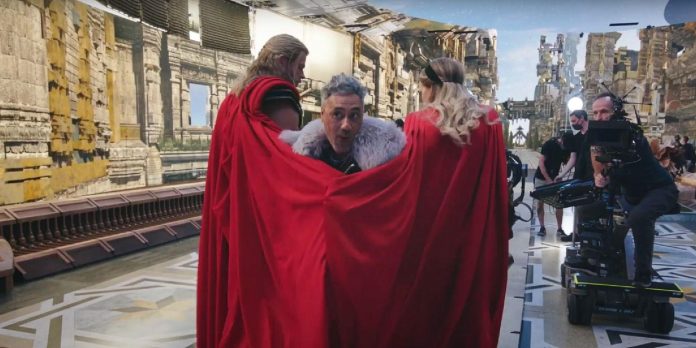 Now that “Thor: Love and Thunder” is finally out, fans are starting to form their opinions about the film. However, judging by the early reactions, Taika Waititi’s second attempt at “God of Thunder” already seems destined to become a very controversial MCU entry. Nevertheless, “Love and Thunder” is in many ways similar to “Ragnarok”, which has both disadvantages and advantages.

Some fans consider “Thor: Ragnarok” their clear favorite, but “Love and Thunder” represent something much more for the long-term prospects of the MCU, as directors such as Waititi begin to receive additional creative licenses for their work and deviate a little further. according to the formula of Marvel Studios. While some may not like this style, the truth is that “Love and Thunder” doubles the same humor that made Waititi a household name.

Make no mistake, “Love and Thunder” is funny at times. Waititi turns almost every moment of the film into a smaller part of one big joke, with some exceptions in some of the more dynamic or emotional moments of the film. Nevertheless, it is that same ruthless commitment to comedy that to some extent prevents getting big plot payouts at the end.

This is Thor’s best personality, thrown in the middle of what often plays like a romantic comedy that Waititi put together out of nowhere. Yes, Jane Foster is Thor’s only romantic interest, but her role has diminished so much over the years that Love and Thunder have to pull hard to convince viewers of how special the bond and past relationship between them was.

It’s fitting that Waititi’s own character, Korg, tells the audience stories about space Vikings, because, after all, it was the director’s script that somehow made it all work. Love and Thunder don’t take themselves too seriously. Perhaps this is the saving grace of a film that dares to exist in the MCU as incredibly self-sufficient, despite the fact that this is the character’s fourth film.

From the very beginning, Waititi asks the audience to let go of Thor in a way to allow him to explore the character, as if “Love and Thunder” were almost a parody of the MCU. The film is incredibly excellent, and this, along with the quality of performance, is its strong point. It’s hard not to laugh when looking at this movie about Thor, but at the same time it’s hard to think, “This is so stupid, why are we laughing?” This is perhaps Waititi’s greatest achievement in this film.

Thor: Love and Thunder are Great for the MCU

It’s fair to say that the director doubles Waititi in all of this in Love and Thunder, and although Ragnarok may eventually become the best Marvel movie, the very fact that Waititi managed to create such a unique Thor is amazing. KVM is often blamed for the fact that directors do not allow directors to impose their personalities on their favorite superheroes, but the fourth phase already offers much better examples of this than perhaps the entire Infinity Saga.

Of course, “Eternal” left many fans with a bittersweet aftertaste as one of the MCU’s biggest disappointments, but it was also Marvel Studios’ first work with a real auteur director like Chloe Zhao. The same goes for “Doctor Strange in the Multiverse of Madness,” in which Sam Raimi takes the film as far into the horror world as Marvel Studios allows, with late reshoots and a comprehensive plot fueling rumors of a clash of visions. And then there’s Waititi, who took advantage of the overwhelming success of “Ragnarok” to turn Love and Thunder into exactly what he wanted, even saying that he turned Thor into a character that fans wouldn’t want to see. How high it ranks among the best MCU films depends on each fan, but “Thor: Love and Thunder” is very interesting from start to finish, despite some problems with the pace.

In all likelihood, “Love and Thunder” will bring Disney a huge profit. In a sense, the film is really needed in order to convince Marvel Studios that such a level of freedom can lead to excellent work by such brilliant directors as Waititi. He shouldn’t be the only one to get this privilege, especially since the MCU is still struggling to find its footing in Phase four, and finding a replacement for Iron Man and Captain America is proving so difficult.

KVM may have reached its peak in terms of hype with “Avengers: Finale”; however, “Thor: Love and Thunder” proves that there is still a long way to go in terms of creativity. It’s just a matter of letting it flourish to its maximum potential.

“Thor: Love and Thunder” is currently available in theaters.

Where does Doctor Strange fit into the rest of the MCU...