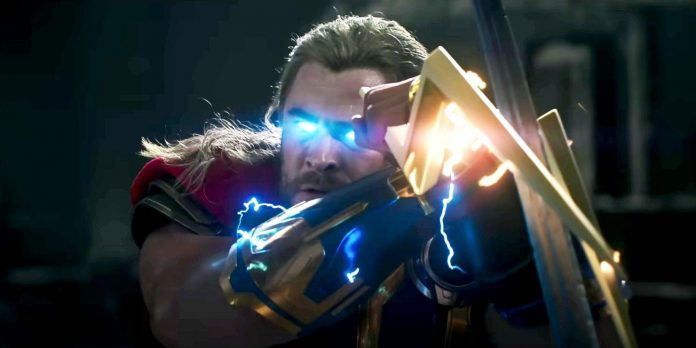 Early reviews for Taika Waititi’s Thor: Love and Thunder are starting to roll in, as Chris Hemsworth’s God of Thunder makes his latest return to the MCU. Following the end of Marvel’s Infinity Saga, a handful of the original Avengers have left the ever-growing MCU. Robert Downey Jr.’s Tony Stark is no more as Iron Man sacrificed himself in Avengers: Endgame, while Chris Evans’ Steve Rogers retired as Captain America, paving the way for Sam Wilson to take up the mantle. However, the remaining member of the original trinity is making his way back to the franchise with Hemsworth reprising his role in Thor: Love and Thunder.

Having directed Thor: Ragnarok, Waititi is back in the director’s chair for the latest Thor story. While Phase 4 has been focussing heavily on the MCU multiverse in recent films, Thor: Love and Thunder will be diverting from this narrative. While not meant to serve as the start of a new Thor trilogy, Thor: Love and Thunder follow the Asgardian Avenger coping with a mid-life crisis after the war against Thanos. For his latest enemy, Thor will be going up against Gorr the God Butcher (Christian Bale) with the help of Valkyrie (Tessa Thompson), Jane Foster/Mighty Thor (Natalie Portman), Korg (Waititi) and the Guardians of the Galaxy.

Related: Why Thor: Love And Thunder Is The Most Exciting MCU Movie Of 2022

After a long wait for Thor’s MCU return, Thor: Love and Thunder is finally hitting theaters this week on July 8. As with other Marvel Studios movies, members of the press were able to see the Thor sequel early. With only a few days left to go before being released in theaters around the world, the first batch of critic reviews for Thor: Love and Thunder have begun to roll out, giving audiences some early impressions of the Hemsworth-led film. Check out several spoiler-free samples of what reviewers are saying about Thor: Love and Thunder below:

Ultimately, Waititi ups the ante in Thor: Love and Thunder, delivering a film that is just as moving as it is funny. Waititi once again lays an uproarious comedy baseline but, unlike with Ragnarok, the filmmaker also weaves in a genuinely affecting message about life and love. It’s a message that, in the end, informs and evolves the titular character and his ex-girlfriend-turned-superhero, paying off a decade-long storyline and establishing interesting new threads that can stretch into future MCU films.

For those who were not fans of Thor’s more comedic treatment in Ragnarok, Love and Thunder may feel disappointingly familiar. There are also moments that are primarily there for a recap, but even then, it’s done in a tongue-in-cheek way that’s entertaining. Meanwhile, those who love seeing this side of the self-proclaimed strongest Avenger will not be disappointed. Thor: Love and Thunder lives up to its name and sets the stage for an exciting future for this corner of the Marvel Cinematic Universe.

Even in Valhalla or Paradise City, though, there is still love and loss; Thor dutifully delivers both, and catharsis in a climax that inevitably doubles as a setup for the next installment. More and more, this cinematic universe feels simultaneously too big to fail and too wide to support the weight of its own endless machinations. None of it necessarily makes any more sense in Waititi’s hands, but at least somebody’s having fun.

To that end, “Love and Thunder” works as well as it does because everything is pushed a half-stop further than most of these movies typically allow. Humor in the MCU is often limited to smirking gags about superheroes doing everyday things in a “Shamballa is the wifi password” sort of way, but Waititi continues to brighten up the Thor movies with his own flavor of wackiness, which is as welcome here as it was grating in “Jojo Rabbit.” Not only is Thor’s space boat pulled by a pair of screaming goats, their shrieks are so frequent they become part of the soundtrack. Not only does Thor feel like a spurned lover when Mjölnir chooses Jane, his new magic ax is always hovering right out of frame and ready to go all “Fatal Attraction” on him whenever he ogles his old hammer. And not only does Russell Crowe spice things up as an orgy-obsessed Zeus in the otherwise meandering second act, he delightfully illustrates the difference between chewing the scenery and swallowing it whole.

More than most recent MCU movies, the screenplay by Waititi and Jennifer Kaytin Robinson shows a crisis of imagination, too often relying on easy laughs from cross-cultural references (Korg keeps getting Jane’s name wrong, calling her Jane Fonda or Jodie Foster) or kitschy pop (Enya, Abba) rather than doing anything interesting with the characters or building real gravity into their situation. Even the inclusion of queer characters — Valkyrie pines for the love of her lost warrior sister; Korg reveals that his species mates with other males to make baby rock monsters — seems more like pandering representation than anything vitally grounded in the storytelling.

If this latest one was aiming to mix it up by giving equal weight to the masks of comedy and tragedy, it’s an effort that falls short. And if the MCU wants to delay the inevitable wearing-out of its welcome, Kevin Feige & Co. might want to pursue the experimentation and eclecticism of the franchise’s small-screen offerings (like “Loki” and “Ms. Marvel”) rather than wear down audiences with the sluggish exhaustion that has begun seeping into the feature films.

Slitterhead: The Creator Of Silent Hill Explains His Main Sources Of...

This Is Tom Clancy’s XDefiant, A New Multiplayer Shooter