Home Entertainment Thor: All the Gods that Gorr Killed in the Comics 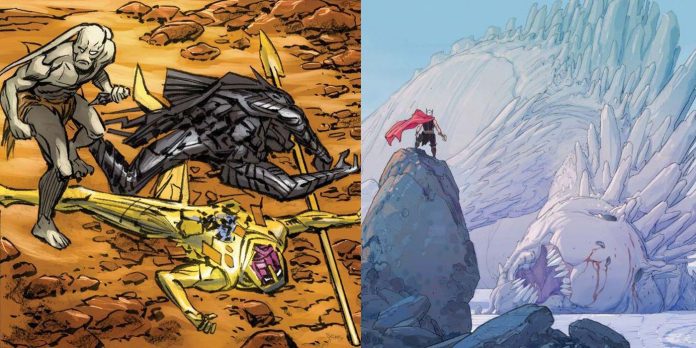 Gorr appeared in Thor: Love and Thunder and quickly became one of the best villains in Marvel Cinematic Universe history. However, he was also a brutal murderer, and while Thor only found a small number of his victims, Gorr butchered gods all over the universe, one by one. The slaughter began when one god mocked Gorr.

Things were a little different in the comics. In Thor: God of Thunder by Jason Aaron and Esad Ribić, Gorr stopped believing in gods completely. When he learned they existed, he lashed out in anger and killed his first god and then set out on a rampage than ended with him battling three different versions of Thor before the butchering finally ended.

An Unnamed God With The Enigma Force

Gorr watched his family die one by one. His pregnant wife died in an earthquake, and their many kids died of diseases. His son was the last to go, and that is when he had the shocking moment that changed his life. The gods he denounced and rejected were alive, and two crashed onto his planet in battle.

These two gods were not named, although later it turned out that one of them was Knull. Gorr thought he had killed both gods, but Knull lived, although without the Necrosword, which the future God Butcher retrieved. Instead, the first god Gorr killed was a golden-armored god who had the Enigma Force attached to him.

No one knew that Gorr was killing gods. Most societies just realized that their gods had disappeared. Thor showed up and helped some of his worshippers by killing a Frost Giant that terrorized them. He then witnessed something that shook him to the core. Someone ran in and said a body washed ashore.

When Thor got there, he saw body parts and took the decapitated head into his hands. He stared into the eyes of the head and somberly said that it was the head of a god. While it remained unnamed, it was a Manidoog god and was the one that brought Thor into the war with Gorr.

The Gods Of Indigarr

Thor went to a planet to answer the prayers of the people there and gave them the water they needed for survival. The people said their gods had disappeared many years before, and there were others who stopped believing at all, angering Thor. However, he understood and set out to find the gods.

These were The Gods Of Indigarr, and it didn’t take Thor long to find their home. What he found was an empty kingdom. There was only one place left to look and he found the great hall where all the gods were butchered by Gorr. The gods were not only killed, but Gorr made them suffer.

Several Gods Through The Years

After finding The Gods Of Indigarr, Thor set off to find out what was happening in the universe. What he found was societies suffering with their gods gone. He then happened upon several minor gods that he found dead, one by one.

These were not gods that had been seen before, and they were mostly cannon-fodder for Gorr the God Butcher. These included the Oaken King, Sequoia Queen, The War Faeries of Wendigorge, and The Coral Immortals of Cataract.

While Thor found all the other dead gods, it was when he found Falligar the Behemoth that it got personal. This is because Thor knew this god and they had crossed paths in the past. In the comics, Falligar was powerful, winning the Tournament of Immortals for five centuries in a row.

This exact scene from the comics was also in Thor: Love and Thunder. The god was changed in the movie, with Thor saying he was the kindest god in existence. It changed his death from Gorr killing a powerful warrior to the tragedy of a peaceful god dying.

Gorr the God Butcher killed the Asgardian god Volstagg, although this isn’t the member of the Warriors Three that fans know well. This was the Volstagg from Earth-14412, Volstagg the Valiant – the Lion of Asgard. Gorr had created a workforce of gods and Volstagg refused to bow down to him.

Instead, Volstagg told Gorr that he had become a god already himself, which was the one thing that Gorr refused to listen to. He killed his own cloned wife for calling him a god, and he crucified Volstagg on a cross for saying the same.

Thor was closing in on Gorr when he ended up finding a god who survived the attacking God Butcher. What Thor found was the God of the Hunt lying mutilated. It turned out that Gorr left Hinkon alive so he could send Thor to find him, setting a trap for the Thunder god.

It was Thor who ended Hinkon’s life personally, but it was Gorr who left the god there knowing that he would die in the end. Thor relieved his suffering, but Gorr was the real killer here.

No one saw Janaro die in the comics, but it was a survivor that told the story of the god’s death. This was Shadrak, a nature god who Gorr left alive after killing every other god in his pantheon, including Janaro, the god of friendship.

This might have been where Thor: Love and Thunder mixed two gods into one moment. When the powerful god Falligar was changed to one of the nicest gods that Thor knew, it likely combined his body with Janaro’s personality.

The ultimate plan for Gorr the God Butcher in the comics was very different than his plan in Thor: Love and Thunder. In the movie, Gorr had the plan to find Eternity and if he did so, he would get one wish and that would be to kill all gods. that is one thing that made Gorr one of the best MCU villains.

However, in the comics, Gorr planned to kill all gods in a much more dastardly and destructive manner. He was going to build a godbomb and to do so, he needed godly blood to power it, and he found that with the peaceful Time Gods, which also allowed Gorr to time travel and that helped seal his fate by bringing in three Thor’s to fight him.

When Gorr killed the Time Gods, he gained the ability to travel through time, which is where he got the final piece to create his godbomb. That piece saw Gorr travel back to the start of time and it was there that he found the birth of an Elder God.

Gorr then murdered the baby Elder God and returned to the present day with the heart of the baby, the final piece of the godbomb. Gorr found redemption in the movie, but in the comics, he went so far that he never deserved or received redemption in his story.