Home Entertainment Thor 4 Ends Its Filming And Chris Hemsworth Celebrates It With His... 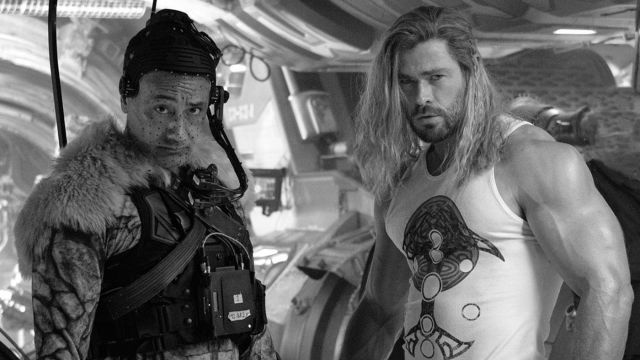 Thor 4: After four months of filming, a quarter of the MCU’s God of Thunder completes its filming and enters the post-production phase for its premiere in 2022. Thor Love and Thunder, the fourth individual film of the adventures of the God of Thunder from Marvel Studios as part of Phase 4 of the MCU, has finished its filming after four months of intense work in Australia and from which we have received numerous graphic material through of leaked photos and videos of his shooting outdoors. This is how Chris Hemsworth himself has shared it through a publication on his official Instagram account with a photograph of himself characterized as the “rocker” (and most imposing to date) version of Thor with Taika Waititi, director of the film dressed in the motion-capture costume of his character in the movie.

The photograph, in black and white, serves to close the filming of Thor Love and Thunder and to thank the entire team that participated in the production, in the words of Chris Hemsworth himself: “It’s the end in Thor Love and Thunder . It’s national no push-ups day, so I thought this super chill photo was appropriate. The movie is going to be crazy, weird, funny, and it might also strike a chord or two. Much love, much thunder! Thank you to all the cast and crew who have made this another incredible Marvel journey. Fasten your seat belts, get ready and see you in theaters !! ”, we can read in the actor’s message, assuring that it is the craziest movie in which he has worked.

Even without a clear context, we see Thor again with an outfit that is not at all characteristic of Asgard and that refers to the more rocker and carefree version of the God of Thunder already seen in the comics. On the other hand, the impressive musculature of Chris Hemsworth is striking for this film, with a Thor stronger than ever after seeing the character in his worst physical and mental state in Avengers Endgame.

Does Star Lord and his fondness for ’80s pop culture have something to do with Thor’s new look? And we remember that the Guardians of the Galaxy will also appear in a movie in which we will see how Jane Foster (Natalie Portman) becomes Mighty Thor.

Battlefield 6: Bad News Nor PlayStation 4 And Xbox One Players