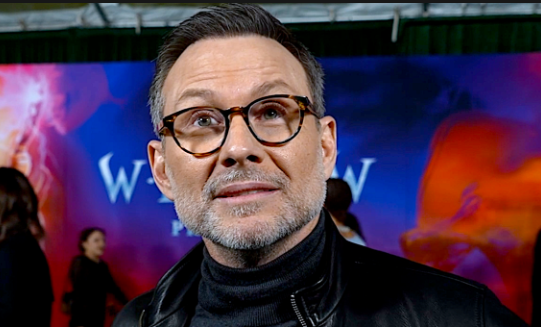 Thirty-four years after Willow Wood first defended baby Elora in the 1988 movie Willow, the new Disney+ limited series Willow has brought us back to the universe. While Warwick Davis returns as the main character in the series and Ron Howard is involved as a producer, a host of new talents have also appeared in the series, including none other than beloved actor Christian Slater. Despite his notoriety, this is not a timid role, and he left the set with several battle scars.

We talked to Slater at the world premiere of the movie “Willow” on the red carpet, and he told the following about the injury he received during the filming of one of the many fight scenes of the show:

It’s pretty intense. I mean, they had a great team. Of course, we did a lot of choreography. I mean, it was… there was a lot of work. I mean, I had a black eye. Yeah. Seriously. I mean, one of those fight scenes, I didn’t realize it until I went back to the makeup trailer and tried to erase that thing, and it wouldn’t erase. So, yes, there were a few cuts and bruises, and yes, it was a tough show, but it was worth it. I mean, I really loved it. And I’m glad that you saw it and it makes you feel good.

There are injuries on set worse than a black eye, but it’s pretty funny that Christian Slater was so engrossed in the scene that he didn’t notice how he hit hard enough to form a bruise. Imagine that you are going to take off your makeup only to realize that it was a real black and blue mark.

In the series, Slater’s character Allagash is no stranger to fighting, and the moment we meet him, he is already involved in the fight. As the actor himself said, there was a lot of work, but he is proud of what was done.

Ever since the first epic Willow trailer was released, people have been excited about the revival of the fantasy universe. Although Disney+ may seem like a strange platform to some, the producers assured the audience that it makes sense. For a long time, the project was headed by director John M. Chu. Although it didn’t come to fruition, even he gave the show his approval by calling showrunner Jake Kasdan to weigh in after leaving the project.

As noted earlier, Ron Howard — the director of the original “Willow” — acts behind the scenes of the series as a producer, and Warwick Davis returns to lead the cast. But Davis and Christian Slater aren’t the only noteworthy names. It boasts a stellar cast, including the return of Kevin Pollack as Rule, as well as Tony Revolori and a host of other talents you’ve probably seen before.

You can watch Willow on Disney+ (opens in a new tab) right now, as well as watch videos of our interviews with Jake Kasdan and the entire cast. If you don’t like fantasy, don’t worry, as there will be a lot more streaming content on Disney+ during December.