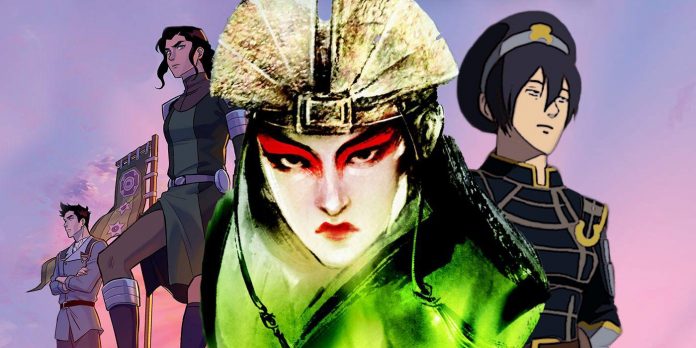 Avatar Universe: The Last Airbender will expand through the release of a trilogy of animated films, but none of them will be centered around Kyoshi’s Avatar. When the trilogy was originally announced, it was assumed that the first film would be about Kyoshi. However, officially the first film will be about Aang. While this may disappoint some, the focus of the first film around Aang is more suited to the return of the franchise.

When reports of the new animated content “Avatar: The Last Airbender” first appeared, it was assumed that the films would focus on Kyoshi, Zuko and Korra, respectively. This was officially rejected by a tweet from Nickelodeon Animation, where Korra’s voice actress Janet Varney announced that the first film from the new Avatar spin-offs: The Magician of the Elements” will be dedicated to “Avatar Aang and his friends” (via Twitter). While this may be potentially upsetting news for fans, focusing one of the upcoming films on Kyoshi has always been an unlikely choice.

Kyoshi became a subject of interest due to the release of two novels for young adults dedicated to her early journey as an Avatar, which were met with enthusiasm for the possibility of their adaptation in an animated format. However, this opinion was ignored by the creators of the franchise, Michael Dante DiMartino and Brian Konicko. According to DiMartino, “I think we’re not doing that right now… for example, we don’t adapt graphic novels into [a movie or] a TV show, we don’t adapt young people’s novels into a movie. or a TV show” (via iHeart). Since the creators currently do not intend to adapt the Avatar’s literary works to an animated format, the richest storylines of Kyoshi’s Avatar for the film have been reduced. Although Kyoshi is a popular figure in the Avatar fandom, she may not be as attractive to a wide audience of new fans, so focusing the entire movie on her would be risky. As a result, the release of the first film in the new center of the Avatar Studios trilogy about her has always been unlikely.

Why Avatar Aang should be the first movie

The new Avatar films mark not only the launch of Avatar Studios, but also the first major animated releases of the franchise after the end of The Legend of Korra in 2014. The most logical hero of the first film is the man who started the movie “Avatar: The Legend of Aang”. : Aang. As the most recognizable character in the franchise, a film dedicated to him will attract a wider audience than a film dedicated to a minor character such as Kyoshi. One could argue that there are other characters worthy of attention, but Aang’s story is far from over. Between the end of Avatar: The Last Airbender and his death before The Legend of Korra, there is a lot of undisclosed territory in Aang’s life that the film could focus on. Focusing the first of the new Avatar films around Aang is a great starting point for Avatar Studios.

While it’s disappointing that one of the upcoming Avatar: The Legend of Aang films won’t be about Kyoshi, the creators’ decision not to adapt the Avatar extended universe novels made that unlikely from the start. To launch Avatar Studios and reintroduce the franchise to a new generation of fans, focusing on Aang in the first Avatar: The Last Airbender movie is a much more reasonable and logical choice, given his popularity and vast uncharted territory. The creators left the door open for potential adaptations of Avatar’s literary works for the screen, so although it is possible that in the future the main focus will be on Kyoshi, she will not be in any of the first three films of the Avatar studio.

Starfield will offer hundreds of hours; will be “more hardcore” than...