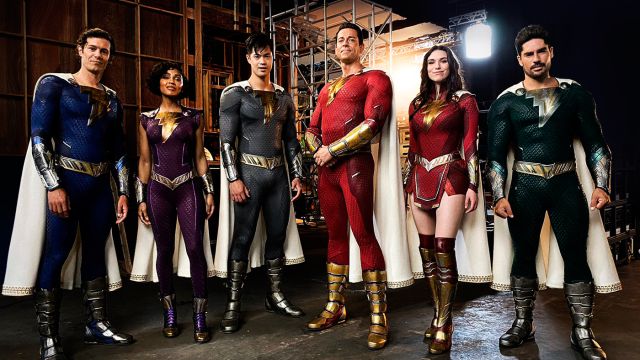 Shazam: Fury of the Gods Director Releases Official Photograph of Superhero Costumes; photos of the filming with one of the villains are filtered Since the beginning of the filming of Shazam! Fury of the Gods have already leaked numerous photographs of the shooting outdoors with its protagonist, Zachary Levi, dressed in the new Shazam suit. A suit that has evolved from the first movie and now looks more “realistic”, always keeping in mind that it is a superhero fiction. Now, its director David F. Sandberg has published an official image with the costumes of the Shazam family, all of them following the same style. In turn, new leaked photos of the shoot arrive with a first look at actress Helen Mirren as Hespera, one of the villains in the film.

And it is that after its ephemeral appearance in the first film, the Shazam family returns to have a more prominent role in the sequel, betting on the actors that we already saw in the first cameo. Mind you, it seems that Grace Fulton will play Mary Marvel instead of Mary Bromfield; otherwise, in the photo we see Adam Brody, Meagan Good, Ross Butler and D.J. Cotrona with Zachary Levi himself.

“I don’t know how long we can prevent the new suits from leaking, so here’s a photo I took the other day,” the director comments in his tweet. As we say, the suits maintain the new style with more marked patterns, a more natural muscle filling and more muted tones, leaving behind the look that is closer to the comics of the first part.

On the other hand, in the last few hours, new leaked photos of the filming of Shazam! Fury of the Gods in Atlanta, this time, with a first look at actress Helen Mirren’s appearance as the villain Hespera, one of Atlas’s daughters, in what looks like armor with a sword at her waist; In the photos, Helen Mirren appears with Zachary Levi, now, with a cape.