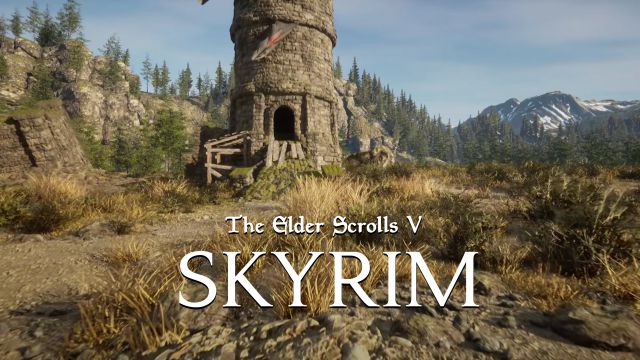 Skyrim: The popular Bethesda video game celebrates its 10th anniversary in 2021. A designer has imagined what the game would be like in the middle of 2021. What would The Elder Scrolls V: Skyrim be like if it had been released in 2021? A few months before the tenth anniversary of one of the most influential video games of recent times, designer Chris G, also known as Hall 00117 on YouTube, has published a video where he recreates the famous work of Bethesda under the imposing engine Unreal Engine 5 graphic, by Epic Games. This kind of imagined remake allows us to get an idea of ​​what this emblematic region would have been like with current technology.

The video, which you can see below, offers us in a couple of minutes a very realistic photograph of what would be The Elder Scrolls V: Skyrim with state-of-the-art graphics, as if it were a high-end computer. There are sequences that seem almost photorealistic. Western Watchtower is the place where we see for the first time a clash between dragons (here you can see another video from ten years ago with this battle); only now the lands have changed in absolutely everything related to the graphic section.

The lighting, the shadows, the detail of the textures and the drawing distance show the possibilities of the Epic Games graphics engine, which in 2022 will begin to bear fruit with the first video games that use it. Currently there are already several games that work with this tool; for example, The Coalition, authors of Gears of War.

Although it was thought that Bethesda was going to take advantage of this tenth anniversary of Skyrim (11-11-2011) for a reissue as a remastering for PlayStation 5 and Xbox Series X | S, at the time of writing this article that product did not exists. It does exist, The Elder Scrolls V: Skyrim: Special Edition, a slightly improved version of the original that was released on all platforms and included additional content. On Xbox Series X | S it has received FPS Boost.

The next episode in the saga is called The Elder Scrolls VI, currently in development but at a very early stage of it. Bethesda is concentrating its efforts, first, on Starfield, scheduled for November 2022.