Home Entertainment This Is The Spectacular Collector’s Edition Of A Plague Tale: Requiem Of... 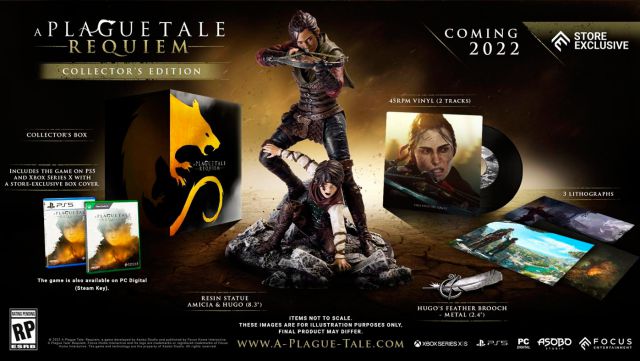 A Plague Tale: Focus Home Interactive and Asobo Studio present the complete Collector’s Edition of their new video game for PC, PS5, Xbox Series and Switch (Cloud Version). The sequel to the celebrated A Plague Tale: Innocence, the long-awaited A Plague Tale: Requiem, has not yet confirmed its release date on PC, PS5, Xbox Series X|S and Nintendo Switch (via the cloud as Cloud Version) more beyond pointing to this 2022; meanwhile, Asobo Studio and Focus Home Interactive, have already presented their spectacular collector’s edition valued at no more and no less than 189.99 euros, including the video game, a figure and many more physical and digital extras. Let’s see what we can find in such a special edition.

All the contents of the Collector’s Edition

Thus, the so-called Collector’s Edition of the video game A Plague Tale: Requiem includes the following:

The game in physical format for PlayStation 5 or Xbox Series X|S with an exclusive alternative cover from the store. The PC versions offer a Steam code to download the game on the Valve store.
A 21 centimeters tall resin statue of Amicia and Hugo.
The feather-shaped brooch like the one Hugo wears in the game.
The soundtrack on vinyl with two songs composed by Olivier Derivière.
Three A4 size lithographs with illustrations from A Plague Tale: Requiem.

ATEEZ Announces That Jongho Is Hurt, Will He Be In The...