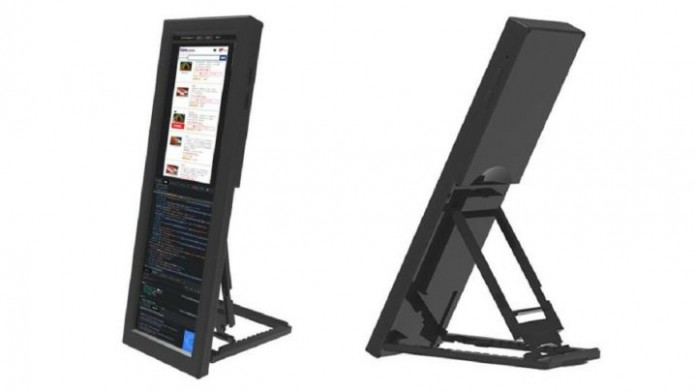 Monitor: Sometimes we find gadgets that take the cake of how absurd they can be. The funny thing is that some have some functions that can cover a need, which gives them something useful. And today may be one of those days when we come across one of those when we meet Elsonic’s vertical monitor that is perfect for viewing social networks.

If you are a Twitter user, you will know that you have several ways to visit your profile. One of them is on your PC, where the screen is larger but there is a lot of space to cover given its design. You can also see it on your mobile, but on a screen of just 5 or 6 inches you have a lot of space to see all the messages that arrive.

However, the Japanese firm Elsonic has come up with a solution that could avoid the constant distractions of a person with these applications or sites. It turns out that the company has presented its Elsonic EK-MD088 monitor, which has a most peculiar way of operating. In essence it is a traditional screen with its image input ports that you must link to a computer.

So far everything is normal, what is more curious is its shape. And it is that for many they will not be surprised by the use of a vertical format screen, but that it is designed for that use is rare. It turns out that we find a panel of 8.8 inches in length and a resolution of 420×1920. As you can imagine, it is a somewhat narrow rectangle at its highest sides. It is encased in a plastic chassis with its USB C outputs to give it power and a mini HDMI for the image signal to arrive. In addition, it has a toothed surface that acts as a stop to regulate the viewing angle of the device.

Its use, according to Mashable, is intended for users to have a screen where they can view their social media feed without losing sight of what is in front of them on their main screen. As it is longer, it is easier to place the design of an app like Twitter, although what is striking is the price it has. And it is that for the about 128 euros that it costs, you could spend that or less money on a larger auxiliary monitor.