Home Entertainment This Is The Hummer That John Romero, Creator Of Doom 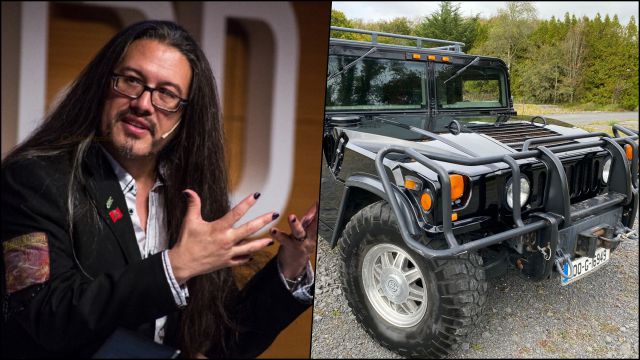 John Romero is selling his Hummer for just over $ 120,000. The creator of Doom no longer uses his car, which includes a functional PlayStation 2. John Romero, the creator of classics like Doom and Quake, among others, has decided to sell one of his most popular cars on Ebay. The 2000 Hummer H1 4-Door remains on the for sale page at a price of $ 125,000.

As we can read in the product description, the Hummer comes bundled with “a lot of great things to make your trips enjoyable.” It includes a front winch, an engine diagnostic system, premium stereo amplifiers, subwoofers, video displays in the rear seats, USB plugs, a display that shows the rear when you park, and much more.

Yes, among all the improvements it includes a fully functional PlayStation 2. It is connected to the rear screens, since it was the console “for the favorite games of children in those days.” Romero himself has uploaded samples of the vehicle on his YouTube channel, which you can see at the top of this paragraph.

“For me, it is the end of an era. I have really enjoyed my time with him. He has uprooted trees from the road, put cars back on the road and traveled through floods, ”Romero explains in the ad. “I’m selling it because I live in Ireland and the Hummer is, well, wider than some of the roads around here. It’s not practical for me anymore, but it can be great for someone else! ”

Empire of Sin has been the latest work from Romero Games, a strategy title that immerses us in the criminal world of the 1920s in the city of Chicago. After a launch with some problems, little by little it has been receiving improvements until facing its next expansion: Make it Count. Last March it entered the Xbox Game Pass catalog in its two main modes.