Home Entertainment This Is How Spectacular Tom Holland’s Spider-Man Looks With The Symbiote’s Black... Tom Holland: Marvel artist Thomas du Crest shares his take on what the current MCU Spider-Man would look like in the classic black suit from the comics. Spider-Man: No Way Home, the latest film from Marvel Studios with Sony Pictures about the arachnid superhero, has become the most successful film of recent post-pandemic times thanks to a collection that has already exceeded 1,000 million dollars in everyone. And beyond its success among critics and audiences, the film leaves several doors open about Spidey’s future in the cinema, one of them, which has to do directly with one of the post-credits scenes. We warn of spoilers about the ending of Spider-Man: No Way Home starting with the next paragraph.

Will we see Tom Holland in Venom’s black suit?

And it is that one of the scenes at the end shows us Eddie Brock / Venom from Sony’s Spiderverse how he returns to his universe after the spell of Doctor Strange, not without leaving a small sample of the symbiote’s suit in the UCM. This small detail introduces the symbiotes to the MCU, prompting Tom Holland’s Spider-Man to join the symbiote, in clear reference to the Spider-Man in the classic black suit from the comics. For this reason, Marvel artist Thomas du Crest has shared his vision of how the actor would look with said suit; and the result couldn’t be more promising.

This has been shared by the artist through his personal account on Twitter, advising that it is a conceptual work for Spider-Man: No Way Home that was finally not used, but that it can anticipate what is to come in future films from Spider-Man. And there is no doubt that the look that Spider-Man looks in these images is as spectacular as it is threatening, fully respecting the look of the comics with the white spider on the chest or the net throwers on the back of the hand.

Thomas du Crest has worked on several Marvel Studios films as an artist, including Spider-Man: Far From Home, Avengers Endgame or Ant-Man and the Wasp, as well as Venom: There will be Carnage by Sony Pictures. 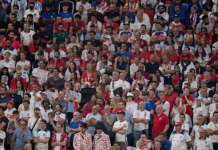 Pokemon Scarlet and Violet “Leak” Pawmi’s Evolution is circulating on the...