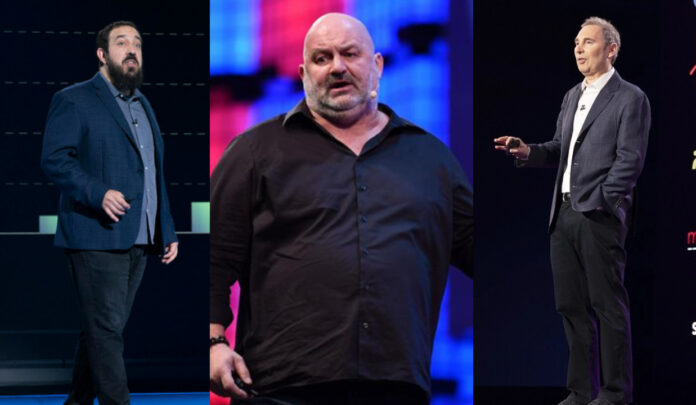 AWS re: Invent 2020 has been the focus of information technology professionals this year as well. This great event, held digitally between November 30 and December 18, witnessed dozens of new products and updates. Here are the innovations introduced at AWS re: Invent 2020 …

AWS re: Invent hosted several policies during its opening week 2020. The most striking presentation in the first week of re: Invent was the introductory session of AWS CEO Andy Jassy, ​​where more than 40 new services and updates were announced in computing, storage, machine learning, databases and more.

CEO Andy Jassy started the session by talking about the numbers AWS had achieved in the past period. Noting that the company, whose revenue is $ 46 billion, grew by 29 percent in the remaining year, Jassy said that in just over 10 years, they became a $ 10 billion company, outpacing SAP and Oracle, the world’s largest commercial IT company, as of this year. .

Andy Jassy also spoke about companies moving to the cloud in pandemic conditions:

We have seen that the companies we have been talking about for years about moving to the cloud are really focusing on planning instead of talking in this period. I think this will be one of the biggest changes we’ve seen. When we look at the history of the cloud, we will see that the pandemic accelerates the adaptation process to the cloud.

It is very difficult to establish a business that will be successful for years. That’s why you have to reinvent yourself more than once. In the last nine months, I’ve thought a lot about regeneration and how to do it well. We see many companies trying to rebuild themselves when they approach bankruptcy. However, you have to do this continuously while you are healthy.

Creating the right culture of new formation is among the factors that make the right regeneration process possible, and an important part of this is knowing which technologies can work for you in this process. Today I will share with you the main points of regeneration that we have observed.

Andy Jassy listed the 8 items required for regeneration as follows:

The most striking presentation of the second week of the AWS re: Invent 2020 event was made by Amazon.com Vice President of Technology and CTO Werner Vogels. Vogels delivered this year’s re: Invent speech from Sugar City factory located outside of Amsterdam. He cited the factory, which has been operating for 150 years, as an example of the transformation and development provided by technology. In the session where Amazon shared its latest solutions, what it contributed to AWS Serverless operations was also explained.

Vogels also gave examples to businesses that are transforming especially during the pandemic process. Vogels said, “For example, with Ava S3, which focuses on women’s health, it can process more than 300TB of health data. Zoom has grown 30 times by using more than 5,000 servers every day, with everyone starting to work and study from home during the pandemic. Lego, on the other hand, can meet the growing demand for flexibility with AWS Serverless. ” said.

The innovations announced by Amazon during the session are as follows:

-AWS CloudShell: AWS CloudShell, a browser-based Shell, can be accessed via the AWS Management Console. With CloudShell, users can access the Amazon Linux 2 environment where the AWS Command Line Interface (CLI) is already installed. With the command line in CloudShell, it becomes easier to manage, interact and review resources securely.

Speaking about AWS Custom Silicon updates during the third week of the event, Peter DeSantis said, “It powers the last generation Nitro C6gn instances. The most exciting and transformative part of the investments made in AWS Silicon is to be able to work on special hardware and software to obtain unique capabilities. By working in this way, we can make improvements faster than before. Found in the statement.

DeSantis explained that the best performing processor introduced this year is the Graviton 2, and that the processor is designed to offer the best possible performance at the lowest price. It was also stated that it is the best processor optimized for AWS and modern cloud workloads, making full use of the Nitro architecture.

Peter DeSantis, SVS Senior Vice President of Infrastructure and Support, announced that they have additional AWS 3400 megawatts of renewable energy projects, including their first projects in Italy, France, South Africa and Germany. Amazon’s renewable energy generation in 2020 was the highest amount produced by the company in a year and was 50 percent above the record level. Compared to the projects announced in the previous year, an increase of 300 percent was achieved. AWS believes it can achieve its goal of 100 percent renewable energy use by 2025.

The innovations announced by Amazon as part of the third week session are as follows:

AWS will train 28 million people globally by 2025: AWS Vice President of Public Sector Teresa Carlson made a statement at the event. “If we think in the long term, we need to ensure that everyone around the world has access to these educational programs, regardless of their social status, economic and educational background. Today, for the first time, I am excited to announce that AWS will offer free cloud training to 29 million people by 2025 to improve their technical skills. ”

AWS currently offers more than 500 free lessons and labs. The new programs will also be free and accessible to everyone.

– Deep Racer 2020 champion announced: Po-Chun Su became the winner of this year’s Deep Racer championship race. The race started with tours of more than 100 developers, followed by 32 head-to-head races. 8 racers took part in the final on December 16th. Thai Po-Chun Su, who intervened when the Norwegian racer went out of the way among the last 3, became the champion of 2020. Po-Chun Su will receive a $ 10,000 AWS promotional loan as a grand prize and will be covered by AWS to watch the Formula 1 race.