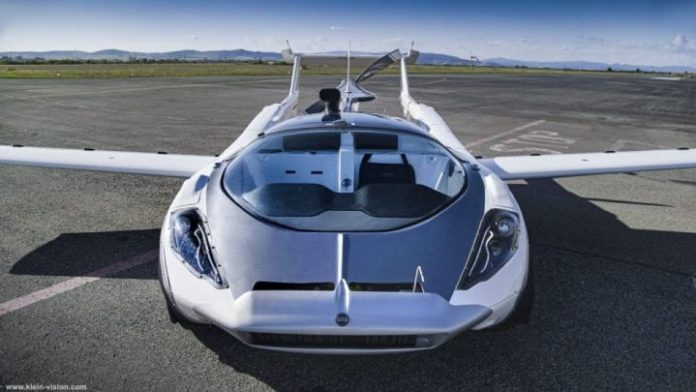 flying car: When we talk about flying cars, we usually refer to vehicles that move using drone technology. But with so many decades of science fiction literature and cinema, it is impossible to read ‘flying car’ and not think of a classic car with 4 wheels that suddenly sprouts wings, or rises and spins its wheels, flying.

And so is the AirCar, which more than a giant drone looks like the car of a James Bond villain from the 70-80s.

What if a Bugatti Veyron and a Cesna 172 plane had a child? The result would be the AirCar, a 4-wheeler that can go down the highway, slip into an airport, and take off like a plane. Created by the company Klein Vision, the AirCar is worth “less than 2 million euros”, and its prototype has gone from the design table to the skies in a couple of years.

The car-aircraft hybrid is equipped with a BMW engine and runs on normal gasoline. Its creator, Professor Stefan Klein, said it could fly about 1,000 km, at an altitude of 2,500 m, and that so far it has spent a total of 40 hours in the air.

But how do you go from the highway to the sky and vice versa? The AirCar takes an average of 2 minutes and 15 seconds to transform from car to plane. The narrow wings fold up along the sides of the car for driving mode, and unfold for pilot mode. In its most recent test, the AirCar arrived by road, driven by its creator, at Nitra International Airport, Slovakia. He got into one of the runways, spread his wings and took off for the international airport of Bratislava, also in Slovakia and 80 kilometers away.

The flight lasted about 35 minutes, and the vehicle reached a cruising speed of 170 km / h. The AirCar can carry two people, with a combined weight limit of 200 kg. But, unlike the prototype taxi-drones and VTOL vehicles that we see today, it cannot take off or land vertically, and therefore needs a runway like a conventional plane.