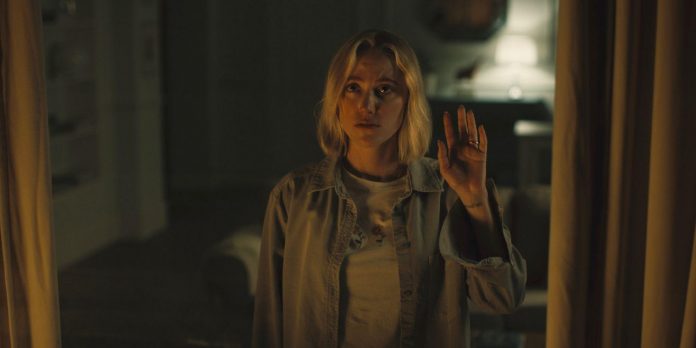 Before Watcher, Scream Queen Maika Monroe starred in It Follows, a psychological horror movie directed by David Robert Mitchell about a young woman (Monroe) who becomes the latest recipient of a curse passed via sexual intercourse. Like the victims before her, Monroe’s Jay becomes stalked by an evil entity that presents itself as strangers — sometimes even loved ones, and the actress does a fantastic job of capturing feelings of paranoia and unease.

In Neil Jordan’s psychological thriller Greta, Monroe plays a similar role as Erica Penn, the best friend of protagonist Frances McCullen (Chloë Grace Moretz). When Frances befriends the widowed Greta (Isabelle Huppert), Erica becomes suspicious of the older woman’s intentions. Her concerns are shown to be valid after Greta begins stalking Frances and then Erica, too. Greta was less well-received than It Follows, which gained an impressive cult following, but Monroe’s performance is still impressive. Playing stalked women is what she does best, and her most recent — arguably best — movie, Watcher, proves that.

RELATED: What Makes It Follows Such A Popular And Enduring Horror Movie?

Directed by Chloe Okuno — who recently directed the A24 horror comedy Bodies Bodies Bodies — Watcher follows a young woman named Julia (Monroe) who moves to Bucharest with her husband, Francis (Karl Glusman). There, she finds herself the object of a strange man’s (Burn Gorman) gaze. The movie begins with Julia and Francis riding a cab to their luxury studio apartment; the taxi driver makes small talk with Francis in Romanian, and Julia, not knowing the language, is left out. And because Okuno doesn’t use subtitles for this or any Romanian-speaking scene, viewers feel her pain.

Immediately upon arriving at their apartment, Julia notices someone staring at her from the adjacent apartment building; she thinks nothing of it and is given a tour of their complex by a Romanian woman she, again, can’t understand. The apartment is big and spacey with a large picture window that faces the apartment opposite. Francis and Julia have sex in front of it, unaware they’re being watched.

That same evening, Julia notices a figure staring at her from the other apartment. She brushes it off once again and busies herself with learning Romanian and exploring the city whilst Francis, who is half-Romanian, goes to work. Eventually, the figure becomes a staple in her day-to-day life, and Julia decides she doesn’t want to stay quiet anymore; she tells Francis, who is empathetic but somewhat dismissive. “I can’t see anything,” he says, before Julia asks him to forget the whole thing.

Francis brushes off Julia’s concerns — even joking about them with colleagues — but she cannot. A serial killer, dubbed “the Spider,” is on the loose, decapitating young women in her area. One day Julia feels she is being followed and takes refuge in a movie theater. Despite the cinema being near-empty, a man sits directly behind Julia, panicking her and forcing her to change locations again. In the grocery store, Julia thinks she is being stalked by the same man, though, as she tells the police later, she cannot be sure of this.

Police incompetence and dismissing women’s experiences are a big theme in Watcher. When Julia tells Francis of the grocery store incident, his response expresses doubt: “He followed you?” “Did he follow you here?” And after Julia answers, no, he didn’t follow her home, he appears to question her sanity. He is reassured of his conclusion once he sees the CCTV footage of Julia at the store. Whilst Julia sees a man threatening her, Francis simply sees a man staring back at the woman staring at him.

The police also disregard Julia, repeating her words back to her in a condescending tone: “You think [he followed you]?” “You think this is the same man you saw in the window?” The only person who actually believes Julia is her neighbor Irina (Madalina Anea), a pole dancer who is used to men ogling her. Irina doesn’t think it’s crazy that Julia followed her stalker to the former’s workplace, and she certainly doesn’t doubt her claims. When Julia asks Irina, “Do I just sound paranoid?” Irina takes a breath before responding:

“Let’s just hope you’ll never find out. The best outcome might be having to live with the uncertainty. Better than getting raped and strangled, and dying with the words ‘I told you so’ on your lips. Right?”

Watcher holds a mirror up to reality and reflects the experiences of female victims of stalking, interrogating their treatment as it does. It is thought-provoking and insightful, without being preachy. Okuno lets the horror unfold for itself, and invites viewers to come to their own conclusion: is Julia crazy or not?

Watcher is also highly entertaining: think Rosemary’s Baby meets Promising Young Woman kind of entertaining. References to the former are everywhere, from the setting to the creeping paranoia, and comparisons to the latter are obvious. Atmosphere is everything in Watcher, and Okuno’s attention to detail is impressive. For example, both Julia and her apartment change appearance by the end of the movie; as Julia ditches bold clothes in favor of a neutral color palette that will allow her to blend in, her apartment appears less minimalist and elegant and more claustrophobic and cold. But the best part about Watcher is Monroe’s performance.

Okuno hit the nail on the head when she told A.frame, “Maika’s very good at adjusting and doing these subtle changes. You can interpret a lot from a very small expression in Maika’s face.” Julia says very little in Watcher, but her facial expressions — when being excluded at the dinner table, yelled at by a neighbor, or dismissed by men — say everything. She is an ordinary character, but Monroe gives her complexity, and viewers will want to stick around to know her fate.

Suicide Squad and Gotham Knights Will Be At DC Fandome in...