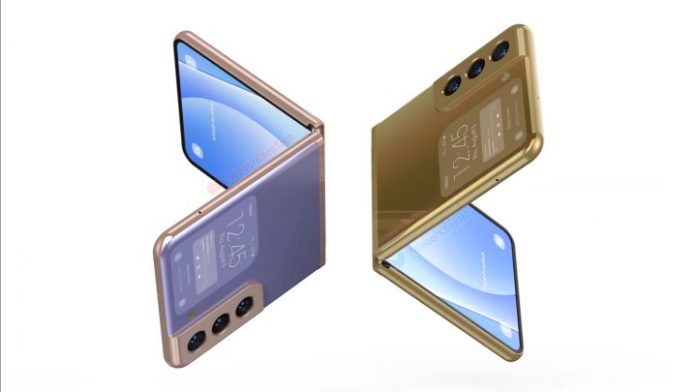 Samsung has in its possession some of the most advanced smartphones of the moment. You just have to look at the Galaxy Fold or even the Galaxy Z Flip and it is a matter of time before more similar phones arrive to continue the saga. And it seems that there are new ideas on the way as we see in the concepts of a new Samsung Galaxy Z Flip.

This could be the new Galaxy Z Flip

Flip phones are the present, but they can still offer more. They are at a very early stage and it is the companies that must propose the new terminals that will succeed the current ones. In Korea we have already seen interesting proposals and today we have seen a new design of the Galaxy Z Flip that could arrive this year.

The structure of the device remains as the one we saw last year: a shell-type device that, when deployed, remains in the shape of a traditional mobile. It will also have a camera on the inner screen with which you can make video calls, but what stands out the most is the outside, which is where you see similarities with the company’s latest high-end terminal.

And it is that you can see the heritage of the Galaxy S21 and everything because of the encapsulation of the three rear lenses. As seen in the Waqar Khan render, the terminal will have its three cameras in a module that extends to the side of the phone. However, this is not the only thing that stands out from the device as it will have another curiosity.

This is an increase in the notification screen that is located next to the cameras. This was a small display that was in this part and in which you can see more details than a simple string of notifications. Specifically, you could even see and control the music playback of the chosen app, although this is still among the unknowns to be confirmed in the future.

What data has not been provided is the content of its chipset, something that more than one would like to know to know its power, RAM space, connectivity and somehow determine the price. But all these details are still a secret that the Korean company has in its possession and that we hope to know soon.

Gotham Knights: Why Turning Harley Quinn into a Villain Would Be...