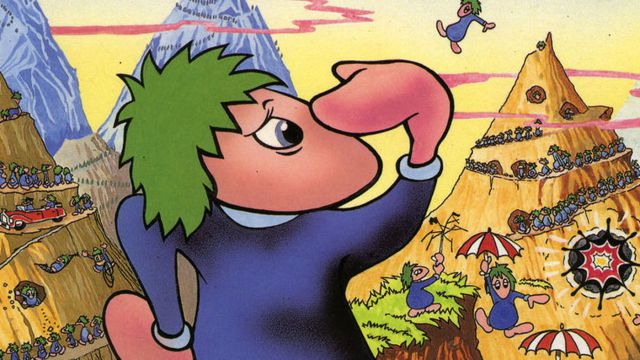 Before GTA and Rocksat, there was “just” DMA Design and a game that catapulted the Scottish studio to stardom.

In 1958, Disney released a nature documentary called White Wilderness that would end up taking an Oscar from the academy. One of the most impressive moments in the film was a sequence in which a strange phenomenon was narrated in the behavior of an animal called lemming, a small rodent native to arctic areas. As it was narrated, when the population was too large a part of them chose to jump into the sea as a form of mass suicide, aiming at a sacrifice in pursuit of the preservation of the group as part of the mysterious behavior. Accompanied by spectacular shots of the rodents falling, orchestrated music and the ominous voice of Winston Hibler, a whole generation of children and adults was left with that idea in their heads, assuming it as one more sinister peculiarity of Mother Nature. Too bad it was all a lie and that the authors of the film were the ones who threw the animals off the cliff. Quite a stain for the “House of the Mouse” (and no, you won’t find the documentary on Disney Plus, for obvious reasons).

It is a shame that the game we celebrate is inspired (unintentionally) by such an aberration, but that will not prevent us from celebrating 30 years since the launch of Lemmings, one of the most iconic games in the original Amiga catalog and an international success that reached a multitude systems as well as being the foundation stone for various continuations that span the decades. In addition, it was the project that put on the map and allowed to expand to a small Scottish studio called DMA Design, which years later would launch a small game, which may sound like you, called Grand Theft Auto in addition to changing its name to Rockstar North, although that’s another history.

It would be on February 14, 1991 when DMA’s new work landed on the British market under the seal of the then powerful Psygnosis. After settling down with some minor but striking works such as the shoot’em up Blood Money, in which signs of technical brilliance could be seen such as the fabulous introduction, the small Scottish studio launched in Amiga what would be the game that would definitely catapult him into fame, a dynamic puzzle title that conquered the market with its originality, inventiveness and sympathy, armed with the irresistible personality of its protagonists: dozens of cute little green men who marched in a straight line and who had to be guided so that they could reach home safe and sound. While it is true that Lemmings do not “commit suicide”, it is true that when the population is very large, a fraction of them look for new areas and sometimes they die in large numbers when they cross rivers through dangerous areas, following the few the others. The idea of ​​being an invisible hand that guides the creatures is the one that feeds the approach of the original game, something novelly kind in a panorama of the video game in which the priority was to annihilate the enemy.

Although to be fair, the original spark of development was not in saving, that would come later. DMA Design was a small team formed then by Mike Dailly, Dave Jones, Russell Kay and Steve Hammond, who formed a study as the studies were formed at that time in the United Kingdom: being friends or classmates and learning to program by emulating others games until they got something that interested a house to distribute and trade, a key moment that separated the hobby from professionalization. DMA was already in the process of professionalization: their jobs, both Menace and Blood Money had sold reasonably well (around 10,000 and 20,000 units respectively, decent numbers) and they already had a relationship with an established house like Psygnosis. They could already afford to rent an office, have contracts and establish themselves as a real studio, although they had no suspicions about the size of their next job.