Home News They spaced to establish a data link 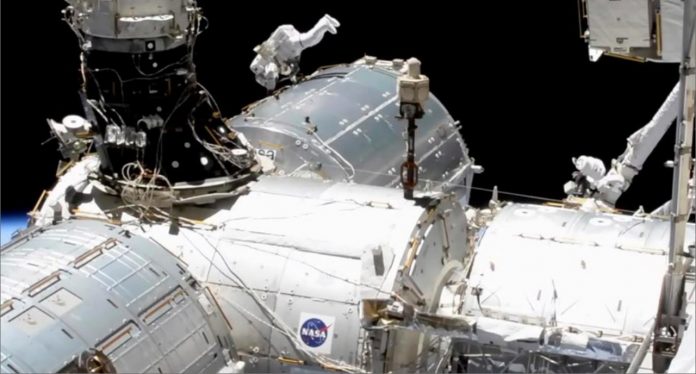 Two NASA astronauts took a spacewalk to develop the International Space Station’s European laboratory. Mike Hopkins and Victor Glover of the National Aeronautics and Space Administration took a spacewalk Wednesday to establish a high-speed data link to Columbus, one of the three high-tech labs in the orbiting outpost.

Astronauts will take their second walk on Monday

The astronauts taking a walk carried European researchers and a new refrigerator-sized antenna that would allow satellites to communicate faster with ground stations.

Additionally, Danish astronaut Andres Morgensen also guided spacewalkers from Mission Control in Houston. Space walkers also had to connect power and data cables to an experimental platform for science research outside the European lab, which had been waiting to be activated for almost a year.

SpaceX delivered its platform, named Bartolomeo, to the space station last spring. The platform, set up with the station’s robotic arm, had to wait for Wednesday’s spacewalk to get connected and activated.

It is also worth noting that Airbus, which founded and operates Bartolomeo, sells space on the platform for special research projects. At the same time, this platform is Europe’s first commercial venture outside the station.

Finally, Hopkins and Glover will take a second space walk on Monday to complete battery upgrades of the station’s solar grid. It is stated that this mission is part of SpaceX’s second astronaut flight, which started in November.