Home Tech They changed Cyberpunk 2077 to be able to relate. 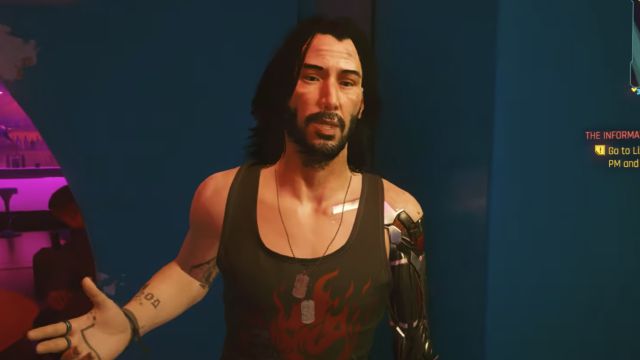 A mod for the PC version of the video game turns Johnny Silverhand’s actor into a sentimental companion at certain moments of the game.

A mod of Cyberpunk 2077 has made Johnny Silverhand, the character played by Keanu Reeves, one of the romance options in the video game. Although CD Projekt RED made it clear before the release of the title that the iconic actor was not going to be in the range of available options with which to maintain a romantic relationship, a member of Nexus Mods, Catmino, has modified the model of characters like Judy or Panam (with whom you can have relationships) to do the same with the singular Silverhand.

The procedure, according to Eurogamer, involves exchanging the models of the characters compatible with adult encounters with Johnny Silverhand. It is also possible to do it with Goro Takemura or the joytoy workers, for more details and without going into the plots of Cyberpunk 2077.

The result, as we see in the video, is an imperfect modeling, but which responds to the desire of those users who wanted to be a couple, even for a few minutes, with Keanu Reeves in the title of the Polish study. If you have the PC version of the game, it is possible. It is to be expected that this mod will be polished little by little.

“A lot of people were asking me for changes to the models in both NPC and player models since the game was released … mainly because they felt that the game lacked customization options; from clothes, vehicles or even companions or NPF friends they met during the missions, ”Catmino explains to Eurogamer, which motivated him to take the plunge and create different mods through file modification.

Furthermore, he anticipates that one of the changes that he plans to implement, due to different bugs that he has encountered along the way, is that of Hideo Kojima. More details will be coming soon, but it will not be possible to exchange with a joytoy worker because Kojima’s code is very limited in options.

Cyberpunk 2077 is available on PS4 and Xbox One on consoles (backward compatible with PS5 and Xbox Series X | S); also on Google Stadia and PC, where mods can be implemented. CD Projekt RED is currently working on the two big patches that fix the state of the title on the machines of the previous generation; the first one is already available. The next gen version will be requested until the second half of 2021.