Home Tech They auction an original Apple 1, only 1.5 million dollars 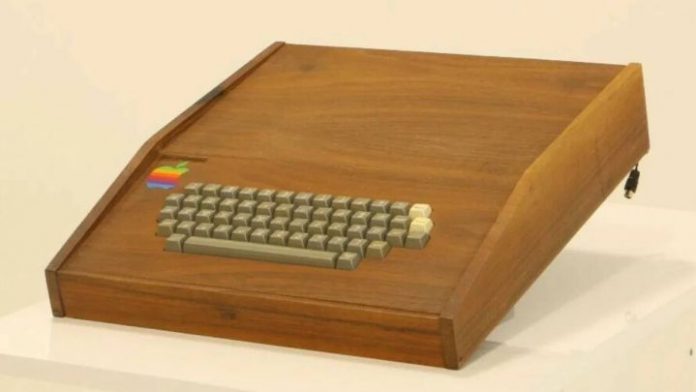 The date: April 1, 1976 – a whopping 42 years ago -; the site: the Homebrew Computer Club in Palo Alto, California; the featured gadget: the Apple-1, a personal computer designed and created by hand by Steve Wozniak, ultimately one of the fathers in the personal-use PC revolution, but at the time an unknown engineer who had created the Apple 1 for personal use. But a friend of his convinced him that they could sell it and start a business. That man was Steve Jobs, and that’s where Apple was born.

The first of its kind

The Apple I went on sale in July 1976 at the curious price of $ 666.66 because Wozniak liked the repeated digits and because they originally sold it to a local store for $ 500 and added a third of the markup. 200 units were manufactured. Unlike other hobbyist computers of the day, which were sold in kits, the Apple I was a fully assembled circuit board containing 62 chips.

However, to make a functional computer, users still had to add a case, a power supply transformer, the power switch, an ASCII keyboard, and a composite video display. An option card that provided an interface for storage cassettes was later marketed at a cost of $ 75.

Of the 200 models manufactured at the time, according to experts there are around 60-70 units around the world. And given that we are talking about an absolute relic in the history of Computing – the Apple 1 is not only the first thing that Apple did, but the first PC that combined a microprocessor with a connection for a keyboard and a monitor – the prices for getting this piece Apple history and Technology history are not low …

An Apple 1 up for auction

Are you a fan of Apple and also have a checking account as large as the one Steve Jobs had? Well, then you can opt for this auction on eBay, and click “Buy” if you want to take an Apple 1 home that an anonymous seller has put up for sale. In fact it even comes with a Sony monitor of the time and is certified by various experts. According to the seller’s ‘listing’:

“This is a fully operational and verified Apple 1 original computer system in excellent condition in its original Byte Shop KOA wooden box, with original power supply and Datanetics Version D keyboard. This Apple-1 is an almost unmodified NTI board. perfect condition both on the front and on the back of the main board where you can see that there have been no modifications or repairs. This system was verified as original by Apple-1 expert Corey Cohen in August 2019 at Vintage Computer Festival West where it was one of two units operated continuously during the show with over 6 hours each day in full operation.

A Sony TV-115 monitor of the time is included, as recommended by Steve Jobs, with a video modulator. Included in the sale is a certificate of authenticity from Achim Baque, keeper of the Apple-1 Registry, which can be viewed upon request. The origin of this Apple-1 system is seen in number 79 of the Official Apple-1 Registry, as the second owner.

Google Launches Chrome 91 With News on Mobile and PC