Home Sport “There’s a reason we bought him,” Van Dijk praises Nunez as a... 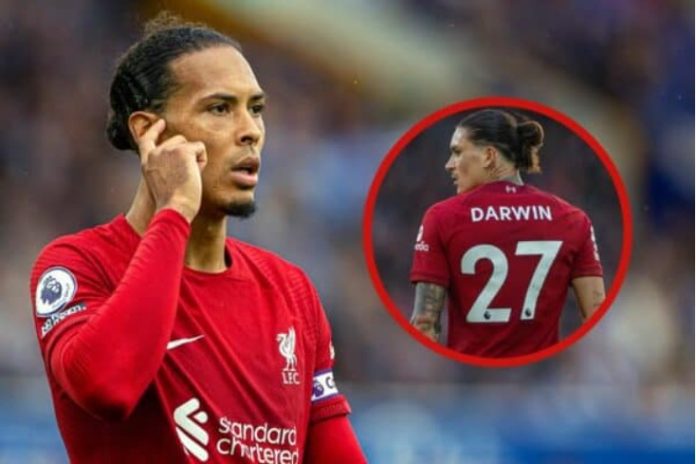 Liverpool defender Virgil Van Dijk believes striker Darwin Nunez is impressed with how he easily handled the burden of his price to quickly become a key part of the team.

The Uruguayan national team player will travel to the World Cup next week after scoring a double in a 3-1 win over Southampton, which increased his tally for the club to seven in his last 10 matches.

After a shaky start, when he missed three matches after a red card for headbutting Crystal Palace’s Joachim Andersen in only his third game for the club, Nunez quickly became a fan favorite.

His transfer from Benfica, which may turn out to be a record transfer for the club in the amount of 85 million pounds, has put a heavy burden on a player who turned only 23 in the summer, but despite the fact that he started all over again in a new country where he barely speaks the language, South America is beginning to flourish.

Van Dijk, who knows all about how to bear the burden of a huge transfer sum after his £75 million transfer from Southampton in 2018 became a world record for a defender at the time, has seen the progress firsthand.

LIVERPOOL, ENGLAND – Saturday, November 12, 2022: Darwin Nunez of Liverpool celebrates his team’s third goal, the second of the game, during the English Premier League match between Liverpool and Southampton at Anfield.

“We never doubted his quality, but obviously when you have such a price tag and goals don’t flow the way you want, it’s good (he showed character) and I think he coped very well,” said the Holland captain.

“Obviously, he has all the qualities of a modern striker.

“There’s a reason we bought him and he’s maturing, he stayed patient, kept his head up and played, and that’s his credit, and we hope he can keep scoring and stay important to the group.”

“Obviously he’s learning how we want to play, he’s learning what we expect from him, he plays a little bit on the left, but also has a free role in the center.

“You know, it takes time. This is a new team, a new environment, a new country, a new language, so it’s absolutely normal for him that he needs a little more time (to get used to it), but there is no doubt that the qualities are there and the goals will follow.”

While Nunez is a new talent, Liverpool goalkeeper Alisson Becker is currently maintaining a higher level, while teammates are struggling for form, and he also played an important role in the victory.

The Brazilian national team player made three important saves after the break from Mohamed Elyunussi, Samuel Edozi and first-half scorer Che Adams to deprive new Saints boss Nathan Jones of hope of getting something from his Premier League debut at Anfield.

“No one should be taken for granted. Of course, we never do that,” Van Dijk added.

“He is important for the team on and off the field. We don’t want him to have to make saves in the first place. He had to do it (against Southampton) and he was outstanding.

One Brazilian who will not go to the World Cup is Liverpool’s first goal scorer Roberto Firmino, whose ninth goal of the campaign is only two less than his result for the whole of last season, and equaled his performance in the 2020-21 season.

“I think Bobby should be home, but who am I to say that?” said the Dutchman.

“He got hit on the chin, all you can do is recover and be ready for the rest of the season and I think he will do that.”

Southampton came to Anfield and were punished for playing too openly in the first half, and Jones admits that it is worth working on.

“We’ve only kept one clean sheet as a club, so that has to change,” he said.

“In the first half we were very passive. We gave world-class players too much space and it was on the verge of suicide.

“This is what we are addressing. We will work on the shortcomings and be better in the next game.”