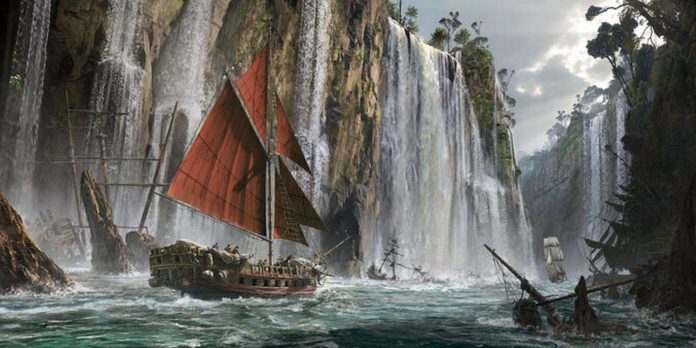 Announced back in 2017, Skull and Bones has become one of the most infamous cases of problematic development in recent years. Originally intended to be released in 2018, Skull and Bones was pushed back to 2019, and then received an additional reprieve, moving it to 2020. In 2020, Ubisoft announced that Skull and Bones was being radically redesigned, and a subsequent Kotaku report confirmed that the game’s development stumbled at almost every obstacle.
Well, Skull and Bones has just been re-shown, and it looks surprisingly solid, albeit a bit like Sea of Thieves from Rare. Along with the November 2022 release date, Ubisoft revealed some of the game’s core mechanics, from ship combat to character customization. During a break in the gameplay, fans saw the world of “Skull and Bones” and its setting in the Indian Ocean, but this was not always the background of “Skull and Bones”. In fact, Skull and Bones had three very different environments during development.
link: Why is there probably no boarding fight in “Skull and Bones”
Three different Skull and Bones settings
Skull and Bones first started development almost ten years later, in 2013. Following Assassin’s Creed 4: Black Flag, Ubisoft Singapore was commissioned to develop a side game that will focus and expand the naval combat system of this game. As the scale of the game grew, Ubisoft Singapore got the green light to move forward, shift gears and turn the game into its own independent project.
With all the assets of Black Flag at the disposal of the developer, Ubisoft Singapore planned to keep the Caribbean setting of this game. Although the key locations in the real world will probably remain the same, the architecture will probably undergo major repairs, especially since players will not be able to go on land. Instead, the bulk of environmental development will be spent on the construction of naval forts and smaller landmasses.
At some stage of development, the realistic Caribbean setting will be completely removed. Instead, the developer decided to go a completely different way, now planning to move the game to the fantastic sea of Hyperborea from Greek mythology. Although it is not really known what this parameter will look like in practice, it will probably slightly change the tone and content of the game. Presumably, instead of other pirates, players will fight with some mythical opponents and, possibly, with one or two sea monsters. Similarly, a more Mediterranean look is likely to give the game a brighter color palette.
At the time of development, this setting would probably have been a rather unique concept, since most naval games focused on real-world settings. However, for some unknown reason, this parameter has also been completely removed. Although this is pure speculation, it may be related to the release of Assassin’s Creed Odyssey, which takes place in Ancient Greece and occasionally moves into the realm of mythology. Since Odyssey also offers some kind of marine gameplay, perhaps Ubisoft wanted to avoid any potential market share between games and asked to change the setting of Skull and Bones.
With the rerun of Skull and Bones a week ago, Ubisoft finally confirmed that the game will take place in the Indian Ocean, the third and final setting of the game. Judging by the trailers released so far, it seems that Skull and Bones prefers a more naturalistic tone and appearance when the player encounters other pirates and privateers again while navigating some pretty realistic-looking islands and waves. .
Skull and Bones is scheduled for release on November 8, 2022 for PC, PS5, Stadia and Xbox Series X/S.

Horizon Forbidden West: Where To Buy The Game, Price And Editions