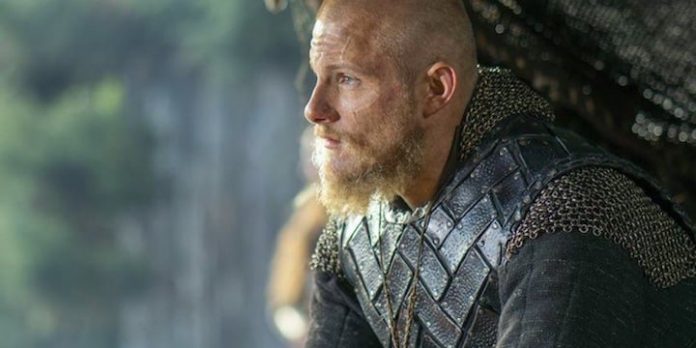 Vikings fans were shocked to see the show’s hero, Bjorn, die in one of the first episodes of last season. Recall that Ragnar Lothbrok’s son (Travis Fimmel) had been seriously wounded during the Battle of Rus and did not have long to live.

He came up with a plan to lull the Rus Vikings into a false sense of security, making them believe that he was dead. When Prince Oleg (Danila Kozlovsky) and his men returned to finish the battle, Bjorn (Alexander Ludwig) emerged and brandished his sword for the last time.

Sadly, Bjorn was shot down by a series of arrows and fans were forced to come to terms with his tragic fate. Remember that his body was preserved in some way and was stored inside a tomb high in the mountains.

An incredibly realistic figure of Bjorn riding his horse stood in the center of the grave, brandishing his sword as if he were about to go into battle. On his side, his two wives, Gunnhild (Ragga Ragnars) and Ingrid (Lucy Martin), had visited his grave to mourn.

Since then, Vikings fans have taken to Reddit to discuss how the strange statue of Bjorn was created, with some believing his body may have been stuffed.

Likewise, other fans seemed to agree with the theory that his body had been tied in a certain position with ropes or chains and wooden frames.

However, they have suggested that the figure was a clay statue, rather than the real Bjorn Ironside. The truth is that it is not known for sure what happened to Bjorn (Alexander Ludwig) after his death, as there does not seem to be any mention of the process in the series.

The mystery has left Viking fans curious, and some wonder if his body preserved from him was a sign that he could never die in spirit. Let’s not forget that Bjorn was given the nickname Ironside due to his ability to emerge unscathed from battles.