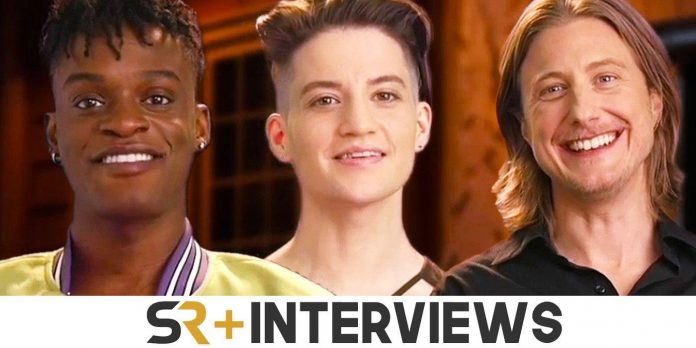 Theo Germaine and Austin Crute star in They/Them, executive produced by Scott Turner Schofield. The queer slasher movie follows a group of campers as they are sent to gay conversion therapy at a Camp Crystal Lake-like setting. Germaine plays Jordan, while Crute stars as Toby, two campers who get swept up in the physical and emotional violence taking place in their woodsy camp.

Crute has starred in Booksmart, Olivia Wilde’s directorial debut, and has had appearances in Atlanta and Orange is the New Black, with a lead role in the short-lived Netflix show Daybreak. Germaine is perhaps best known for their role in the Netflix series The Politician, but they have also appeared in Work in Progress, Equal, and 4400. Schofield is a multi-hyphenate trans activist who has consulted on shows like Euphoria, The Craft: Legacy, and One of Us is Lying.

Related: 10 Movies & TV Shows Where You’ve Seen The Cast Of They/Them Before

Screen Rant sat down with Crute, Germaine, and Schofield to talk about They/Them, including how they kept it light on set, the importance of the film to the horror genre, and more.

Screen Rant: Theo, you get some big moments with Jordan in the film – your scene with Carrie [Preston], that ending scene. This idea of revenge versus not stooping to the level of violence that has been historically perpetuated against the queer community – it was really interesting. So what was your initial reaction to reading the script and that scene?

Theo Germaine: Oh, gosh, my initial reaction to reading the script, auditioning, getting an offer, and maybe working on the movie, it was all real intimidating. This is serious subject matter and I have so many feelings about it because conversion therapy is so horrific to me. I was like, “I hope that I can do this well.” And I think that I did. I was really intimidated. This is a big responsibility. I felt like I was kind of leveling up as an actor on the outside, but also dealing with the actual subject matter in the film was kind of challenging and required me to really try to develop some strong boundaries around all of it, because I had some really bad experiences in my past, especially when I was the age that Jordan is, which is 17.

I’m literally losing my train of thought, but conversion therapy really sucks. It’s really scary. Even if you did not go to conversion therapy as a youth or as an adult, it’s very common to receive negative reinforcement around being LGBTQ and doing a movie about that subject matter specifically, it can open up wounds. Like you got to make sure that you got your band-aids ready if that makes sense. Yeah, challenging, but really fun, really empowering. The set and the crew and the cast and Scott [Turner Schofield] and John [Logan], everybody was really supportive. So it turned into this beautiful victory, I think.

That was one of my favorite parts of the film – the idea that queer people can create a community anywhere, even under circumstances like that. Despite the heavy subject matter, it looked like you guys were having fun. What did you do to lighten up the energy on set?

Austin Crute: We went to like a drive-in movie, we saw Candyman.

Theo Germaine: We did, five of us saw Candyman together.

Austin Crute: We had little movie nights and a card game that we would play.

Theo Germaine: It was like a word association card game that we would play. We watched Friday the 13th together one night.

Austin Crute: I wasn’t there.

Theo Germaine: Oh, you weren’t there, that’s right. Why weren’t you there?

Austin Crute: I don’t know! But it was really fun. [We did] ziplining. I gotta post that.

Scott, horror has been queer coded since the dawn of time essentially. Can you talk a bit about why this story was important to tell and what you brought to the film?

Scott Turner Schofield: Well, the history of horror has not been good for LGBTQ folks, especially trans folks. And so, when I read the script and I saw the way that John, who should have a doctorate in horror, took specific… The greatest horror fans are going to have the best time because you’re gonna be able to count the references. And, at every single turn, John is flipping it, and turning it into something new, something different. That was what really drew me into it. And it sits with me, because professionally, my mission is, we’ve got to be able to be out and bring all of ourselves in Hollywood to the table because these are stories that are not being seen.

Coming in and being able to work on something like that, being able to now show Hollywood a success story starring queer people made by queer people and saying, “Let’s do more, Hollywood loves the success. Let’s keep doing more,” that was just completely on mission for me. And then to work with these folks, to make sure that their set was a playground and not a place where they were going to experience microaggressions, not a place where they were ever going to worry about how they were coming off, or what was going to be done with them in the final edit.

Austin Crute: And it’s also a testament to this can be done in a place that traditionally maybe one wouldn’t choose to film something like this. All the crew was mad respectful and if anybody was having a learning experience and educational experience, okay. That’s what it’s all about. It’s exchange – we’re exchanging, growing, and it just felt really, genuinely good.

Scott Turner Schofield: But also, our crew was mostly LGBTQ folks who were working on other productions in Georgia. [They] quit their jobs to come work on this because they wanted so badly to be on something that was queer-made; that had this particular slant on it. And we could all feel it.

A group of teenagers at an LGBTQ+ conversion camp endures unsettling psychological techniques while being stalked by a mysterious masked killer.

Check out our other interviews with They/Them stars Kevin Bacon & Carrie Preston, as well as writer-director John Logan.