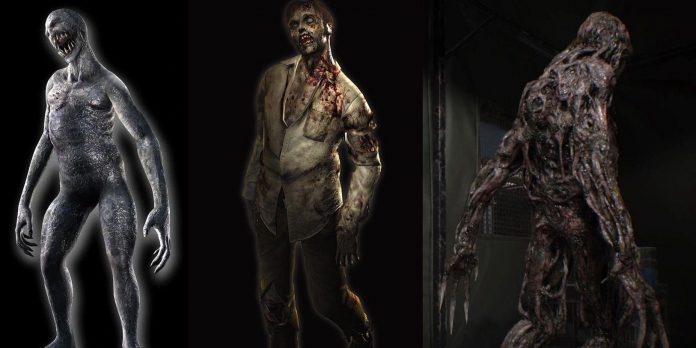 Many Resident Evil games feature a wide variety of enemies, some of which are better than others in terms of strength or design. Certain types of enemies appear in several games, but often with minor changes for each game. While enemies can be remembered for various reasons, there are some non-boss enemies that are remembered by players because they would be happy to never meet them again in a Resident Evil game.

Resident Evil is a survival horror franchise that begins with the story of the Spencer Mansion and Raccoon City, and then expands to show biologically dangerous events in places around the world. Although the origin of the virus is different in each game, the outbreak is often associated with larger goals of the antagonistic organization. Since Resident Evil remakes are made as reinterpretations, stories can change. Nevertheless, Capcom tries to keep the essence of the series unchanged.

Only in the main Resident Evil franchise there are 8 games, and players will have to face a lot of monsters. Standard monsters as well as bosses change from one game to another, from classic zombies to molded ones. However, there are enemies, such as the crows from the first Resident Evil, that players would be happy to never encounter again.

Crows are the most annoying enemy of the Resident Evil remake

These crows put the players in a hopeless position. Shooting at them wastes ammo because of how difficult it is to hit them, but if left alone, they will be able to attack the player and deprive him of health. Despite the fact that crows tend to be more passive compared to other enemies, they will attack if the player shoots at them or runs past them. A fan-made first-person remake of Resident Evil would actually make crows more tolerable, as they would be easier to see and either shoot or avoid. However, it is unlikely that Resident Evil will be remade to add an official first-person view or a shoulder camera in the near future, so crows will continue to be a source of frustration for players without adding anything to the game’s plot other than symbolizing death.

Resident Evil 6 had a lot of problems and the fans didn’t take it very well. Capcom moved away from the roots of Resident Evil in the survival horror genre and focused on action and joint campaigns for Resident Evil 6, in which all the horror elements that could have been removed. Capcom has at least acknowledged Resident Evil 6’s mistakes in the Resident Evil 3 Remake Easter egg.

The main enemies of RE6 are javo, which is especially unpleasant to fight. Even if players get shot in the head, some of them will mutate, acquiring a monstrous head and continuing to attack. Their durability and tendency to mutation make J’avo a headache and deplete ammunition. Capcom should keep J’avo away from any future games or remakes.

Crimson Heads was a new and disappointing addition that was added to the Resident Evil Remake. Crimson heads can withstand more damage from a shot, and can also deal more damage to the player. They are also more maneuverable, as they can run and jump. All these elements make them enemies that players don’t expect to meet, although the Crimson Heads may return if Capcom remakes the Resident Evil Remake. It is especially difficult to keep track of the zombies that will be reborn as Crimson Heads, and in which room of the mansion they are.

Fortunately, the crimson heads can be avoided, and after they are killed, they will not come back to life. The Crimson Heads themselves appear after the zombie has been dead for a couple of hours. The zombie continues to mutate and is reborn in the form of a crimson head, unless he is burned, beheaded or his legs are cut off. In another remake, Capcom could at least include more lighters in Spencer’s Mansion to fight zombies before they become Crimson Heads.

As the name suggests, regenerators are able to regenerate parts of their body that have been destroyed. This ability will later be adapted for use by J’avo and is unlikely to change in Resident Evil 4 Remake if the enemy reappears. However, their ability to regenerate is not the worst part of regenerators. They can pull the player in by stretching out their limbs to grab him.

They can also jump on the player, but if all these abilities aren’t bad enough, regenerators can slide towards the player on the floor if their legs are kicked off, moving faster by sliding than when walking. There are no regenerators in the Resident Evil 4 Remake trailer, but that doesn’t mean Capcom won’t present them in a more terrifying and painful form.