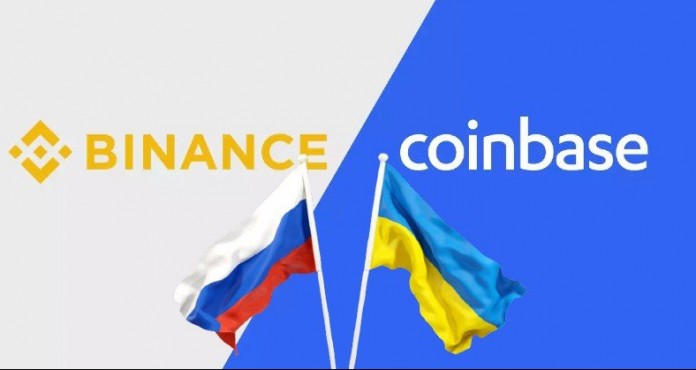 While sanctions against Russia, which occupied Ukraine from all over the world, continue to come, the world’s largest cryptocurrency exchanges made a statement. Binance and Coinbase have announced that they will not block Russian users from their platforms because they do not want innocent people to be harmed.

After Russia officially declared war on Ukraine, many people around the world started to provide material and moral aid to Ukraine. Cryptocurrency donations were also among the donations made. In a news we shared with you in the past days, we mentioned that the crypto money aid to Ukraine reached 12.7 million dollars in different currencies.

In addition, as a result of sanctions from governments, the possibility of Russia turning to cryptocurrencies came to the fore. Following this possibility, the European Union made statements stating that they would take new measures on cryptocurrencies and stated that it was continuing its investigations. Now, explanations have come from the world’s largest cryptocurrency exchanges on the subject.

Binance and Coinbase will not block Russian users

Binance and Coinbase, one of the world’s largest crypto exchanges, announced that they will not prevent Russian users, although other giant companies restrict their services in Russia. In the statements made by both exchanges, considering the economic turmoil of the country, Russian users should be treated fairly; That’s why he said such a decision was made. However, the two giant companies added in their statements that they comply with international sanctions rules, and that they can turn to different restrictions if necessary.

Coinbase CEO Brian Armstrong said in a statement on social media, “We believe that everyone deserves access to basic financial services, unless the law says otherwise. Some Russians prefer to use cryptocurrencies due to problems with their currencies. Many of them oppose what their country is doing. For this reason, we think that such a ban could harm them.”

A spokesperson for Binance, the world’s largest cryptocurrency exchange, also told Reuters: “We will not unilaterally freeze the accounts of millions of innocent users.” CEO, nicknamed CZ, Changpeng Zhao also stated in his statements that it is not realistic for Russians to use crypto money to launder their money.

The director of Sonic 2 on the possible crossover of Super...