Home Entertainment The World of the Wild West: 10 Tessa Thompson Projects that Need... 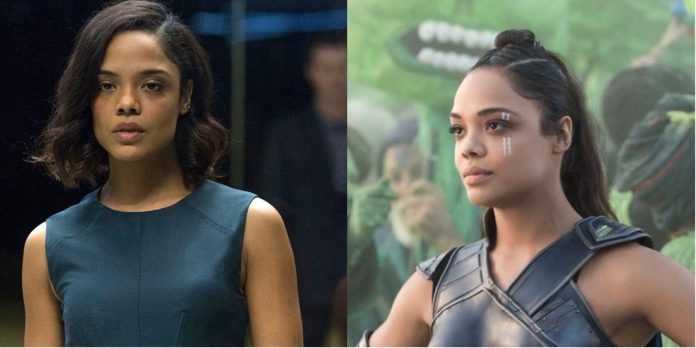 Now that HBO’s Westworld is back, fans get to see Tessa Thompson return to the cerebral science-fiction series. Since Westworld’s initial premiere in 2016, Thompson has played a wide range of material. In Season 1, Thompson played the calculating Executive Director of Delos, Charlotte Hale. By Season 3, she was playing the robot host Delores Abernathy, who assumed Hale’s body.

Thompson’s impressive acting throughout that transformation comes as no surprise when assessing her film career. For fans of of Westworld, her film roles will only further prove that Tessa Thompson is one of the most consistent actors working today.

F. Gary Gray’s Men in Black: International was the fourth film in the series and the first in the Men in Black universe not to feature Will Smith and Tommy Lee Jones in the lead roles and without Barry Sonnenfeld as director.

Although the film was generally poorly received, the lead acting performances were largely exempt from criticism. In fact, Tessa Thompson, Chris Hemsworth, and their onscreen chemistry were often considered the saving grace of this film. As the newest MIB recruit, Thompson brings a sense of humor and charisma to the role of agent M.

Although Selma is arguably one of Thompson’s best films overall, her supporting performance as civil rights activist Diane Nash was fairly limited. Selma featured a large ensemble that included Oprah Winfrey and Tom Wilkinson, but Thompson shines in her few scenes and gives voice to the young activists of the movement.

Thompson plays Nyla, a young woman who chooses to get an abortion. Thompson holds her own in a difficult role among an ensemble of well-regarded actresses. Most of her scenes are with her Westworld co-star Thandiwe Newton as well as Whoopi Goldberg, who plays her mother.

Justin Simien’s independent social satire takes place at a fictional Ivy League school and focuses on racial dynamics among the students. Dear White People premiered at the Sundance Film Festival in 2014 to critical and commercial success, eventually spawning the Netflix original series of the same name.

In the original film, Tessa Thompson plays the leading role of Sam White, a college radio host who rocks the boat of the student community with her podcast Dear White People. Thompson is perfectly sardonic in the role, adding just the right balance between strong comedic timing and her delivery of pointed truths.

Following her breakout year in 2014 with Dear White People and Selma, Thompson next worked with director Ryan Coogler in the box office hit Creed, starring Michael B. Jordan in one of his best film roles as the son of heavyweight champion Apollo Creed. Creed also saw the return of Sylvester Stallone as Rocky Balboa.

Thompson played Bianca Taylor, a singer who ultimately becomes the title character’s love interest. In addition to her subsequent recurring appearance in the Marvel Cinematic Universe, the Creed films represent another successful franchise within Tessa Thompson’s career, which proves that she can excel in movies with strong commercial appeal.

Tessa Thompson made her big foray into the Marvel Cinematic Universe with Taika Waititi’s Thor: Ragnarok, which reinvigorated the Thor films. Here, Thompson plays Valkyrie, a warrior who teams up with the titular character (Chris Hemsworth) and Bruce Banner (Mark Ruffalo) to fight Hela (Cate Blanchett).

With Ragnarok, Thompson was praised for her fierce portrayal of Valkyrie, while the film was embraced for its unique tone and use of comedy. Thompson is set to return in the highly anticipated upcoming movie Thor: Love and Thunder, which will reunite her with Waititi and Hemsworth once again.

This hidden gem on Amazon Prime Video was nominated for the Emmy Award for Outstanding Television Movie in 2021. The period romance written and directed by Eugene Ashe stars Thompson as the title character opposite actor and former football player Nnamdi Asomugha.

Related: 9 Movies And TV Shows To Watch For More Of Bridgerton’s Regé-Jean Page

Sylvie’s Love tells the story of a summer fling between Sylvie and Robert in 1962 that is then rekindled years later. The film was critically lauded for its nostalgic aesthetic as well as its subtle radical act of telling a sweeping 60s-era romance with two Black leads. For those who haven’t seen Sylvie’s Love, it is simply one of Tessa Thompson’s best performances.

Alex Garland’s follow-up to Ex Machina was the cerebral psychological thriller/horror film Annihilation. Loosely based on James VanderMeer’s novel, Annihilation follows a team of women who journey into a strange and mysterious zone called “The Shimmer.”

Annihilation was praised for its juxtaposition of beautiful and disturbing imagery as well as for its provocative ideas about mutation and self-destruction. Alex Garland’s writing and direction stand apart from similar genre films because of his thought-provoking subject matter, which often leaves much to interpretation.

Sorry To Bother You

Starring opposite Stanfield, Tessa Thompson plays Detroit, an artist and Cash’s girlfriend. Detroit uses a fake “white” voice in her art as well; that voice is dubbed by actress Lily James. The film’s clever conceit leaves the audience thinking about race as it relates to capitalism and self-marketing. Like Westworld, Thompson immerses herself into a strange universe that uses abstraction to deliver dark truths about the real world.

This past year, Tessa Thompson received critical acclaim for her internal performance in Rebecca Hall’s adaptation of Nella Larsen’s novella. In Passing, Thompson plays Irene, a Black woman living in Harlem in the 1920s who rekindles a friendship with the now white-passing Clare (Ruth Negga).

Much of the success of Passing rests on the two lead performances, who often speak in silent glances and gestures. Thompson and Negga are a match on screen, imbuing each of their characters with the kind of nuance and subtlety that are hard to find in film these days. Between Passing and Westworld, Thompson has more than proven her ability to tackle complex subject matter as well as commercial and independent projects.