Home Entertainment The world of DC comics of the 1990s returns to the official... 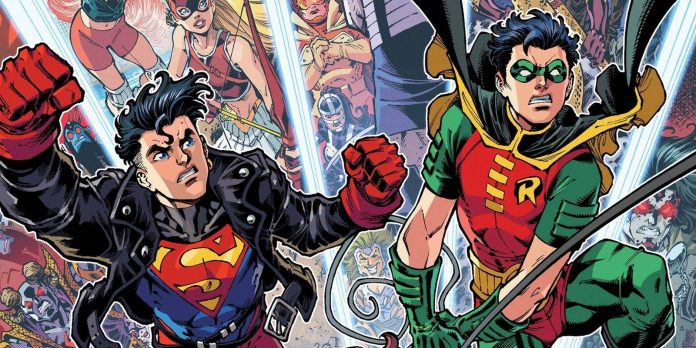 The 1990s are officially back in fashion at DC Comics thanks to an alternate universe presented in a new tie-in to Young Justice Dark Crisis. In the first issue of Dark Crisis: Young Justice, some of the main characters are carried away to a kind of alternate world or dimension, where everything has returned to the status quo of the 90s. The fan-favorite Young Justice team debuted in the late 1990s, and this series plays with nostalgia for that particular era of DC Comics characters.

Young Justice reunited after the death of the Justice League and the events that followed The dark crisis. The original series “Young Justice” ran from 1998 to 2003, and the main characters from this series — Robin, Superboy, Impulse and Wonder Girl – continued to appear in “Young Titans” (2003). These four characters, in addition to Arrowett, who retired, play the main roles in Dark Crisis: Young Justice, and their difficult story is presented in full. After the events of Infinite Frontier have restored once-erased elements of the larger DC universe, these young legacy characters are forced to reckon with their problems, both old and new.

The first issue of “Dark Crisis: Young Justice” by Megan Fitzmartin, Laura Braga and Luis Guerrero opens at the Justice League Memorial as Wonder Girl reflects on the oft-forgotten legacy of young justice after the recent appearance of old D.C. characters in “Dark Crisis.” After the memorial, Robin, Superboy and Impulse are transported to an alternate world, where everything is like in the 90s. Tim Drake wakes up and sees Alfred, who is currently dead in the main continuity, at Wayne Manor. Superboy ends up in Hawaii with Dubbilex, one of his original guardians. Impulse trains with Max Mercury and Wally West as The Flash. The three boys find their way to the Young Justice’s original headquarters in Happy Harbor and embark on a battle with one of their oldest and strangest villains: the Mighty Gifted.

Readers also get a glimpse of the map of this new world as Impulse circumnavigates the continent. The map highlights the main feature of the new world: characters from the 90s not only remember, but also act. The map, in particular, depicts Connor Hawke as Green Arrow and Kyle Rayner as Green Lantern, two once popular legacies erased by the New 52. Like the core members of Young Justice, these heroes of the 90s have been replaced by newer characters, many of whom are currently featured in the main book Dark Crisis.

These new characters, of course, deserve love and praise on their own, but Young Justice: Dark Crisis seems to be doing a double job, restoring these beloved stories in the post-Infinite Frontier DCU, as well as playing on fans’ nostalgia for this bygone era. As DC continues to move forward by diversifying its old characters, Young Justice: Dark Crisis promises to honor the story of these beloved characters by encouraging them —and their fans — to move beyond the past and into the future. While it’s nice to see the District of Columbia honoring a long-forgotten and centuries-old era of its history, the 90s certainly can’t last in this latest installment of “Young Justice.” The main characters have a complicated story, but they are also ready to move on. Soon fans will see Tim Drake in his own ongoing series, just as Kon-El will get his own mini-series “Superboy”.

Marvel’s Guardians Of The Galaxy Unveils Its Eighties Soundtrack