Home Entertainment The Witcher: why did Geralt leave his mother 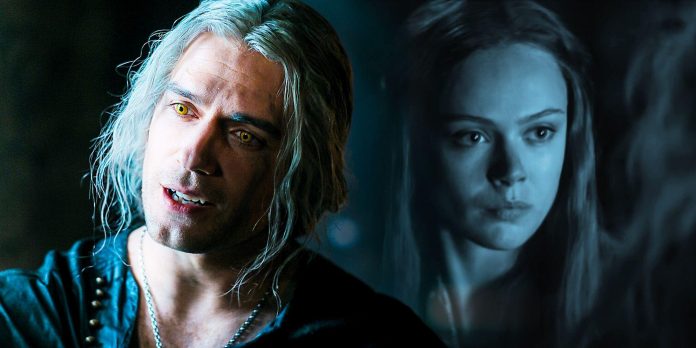 In the 8th episode of the 1st season of The Witcher, Geralt is abandoned by his mother, but it is never explained why exactly she does it. Little is known about the background of Geralt’s origin before the Witcher, but it is known that his mother’s name is Visenna, and she is considered a druid and a healer. She is seen tossing an apple to Geralt in the same scene where she eventually throws it. Geralt also sees his mother for the first time in adulthood during a fever dream, and she helps him heal. He tries to put pressure on her why she left him and whether she knew about the dangers of mutations that would turn him into a witcher, but she does not give clear answers.
The second season of The Witcher also offers no explanation, so viewers are still wondering and theorizing why. It is worth noting that Visenna appears in a story called “The Road of No Return” and was later confirmed by the author Andrzej Sapkowski as Geralt’s mother, but this still does not give an understanding of why she left Geralt with the witcher Vesemir. That leaves three interesting theories worth exploring to understand why she gave him to the Witcher Order in the first place.
Related: A new character in Season 3 of The Witcher Exacerbates Concerns about the accuracy of the book
The first version of why Visenna could have left Geralt is that Geralt himself was a surprise child. There is some credence to the theory that Geralt was a surprise child and thus belonged to Vesemir as his Unexpected child. In the scene where Vesemir picks up Geralt as a child, it seems that he is expecting a boy. Perhaps one day he saved Visenna and chose the law of surprise as a payment. It would be logical if Vesemir applied the Witcher’s law of surprise to Visenna, as a result of which he received the right to resurrect Geralt.
Was Visenna from The Witcher afraid to raise Geralt alone?
The second possible reason is that Visenna simply could not raise Geralt on her own. It’s not as interesting as theory, but it makes some sense. If it is believed that a man named Corrin, also from the story “The Road of No Return”, is Geralt’s father (although this is never confirmed), then Visenna remained a widow even before Geralt was born. This will leave Visenna without someone to raise Geralt with. Since she was a wandering sorceress/druid, very similar to Yennefer from the Witcher, it is likely that raising a child on the road was simply impossible or what she wanted for him.
The last theory, which may be the most likely, is that Visenna knew about Geralt’s fate as a witcher and knew that this was the place where he belonged— or at least was destined to be. As a powerful sorceress, she may have foreseen that he was destined to become a witcher and that one day he would be involved in events that changed the world. Scenes from season 1, episode 8 of The Witcher hint at this a little, but everything is very vague. Nevertheless, Geralt’s fate is linked to Ciri, and probably Visenna saw this and knew that she had to give him to Vesemir so that he would be properly trained for the future.
It is expected that the story of the third season of “The Witcher” will delve deeper into the forces of Ciri, which were created in the second season, and also show more of the unrest that engulfed the kingdom. It is likely that the second season of The Witcher will be released in late 2022 or early 2023, although there is no official release date yet. It remains to be seen if this season will provide more information about why Visenna left Geralt. It’s likely that the answer may fade into the background compared to the more important story arcs in the upcoming season of The Witcher, but it’s worth exploring later. In the meantime, we can only wonder.

Namor’s First look at the MCU Secretly Confirms that he is...

The Walking Dead: The theory that ensures the return of Michonne...