Home Entertainment The Witcher: Everyone is hunting Ciri in Season 3 (and why) 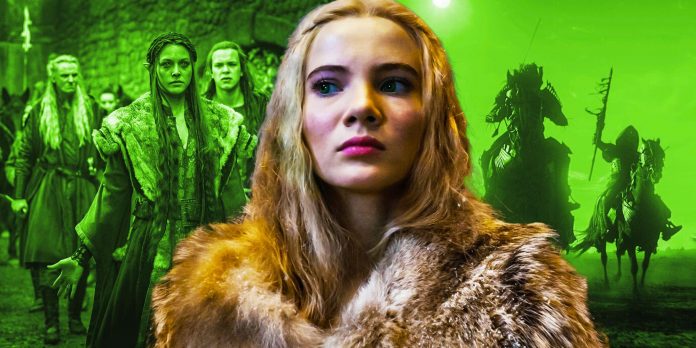 The Witcher season 3 will continue the stories of Geralt of Rivia, Ciri, and Yennefer, which will surely get more complicated as Ciri is now being hunted by various groups with different motivations, and here’s every one of them. Created by Polish author Andrzej Sapkowski, The Witcher is a series of novels and short stories that have become widely popular, in big part thanks to their adaptation to video games, and it’s now one of the most extensive and beloved universes in the fantasy genre. After being adapted into a movie and a TV series in Poland, The Witcher got its first English language adaptation in 2019 thanks to Netflix.

The Witcher season 1 focused on the stories of Geralt of Rivia (Henry Cavill), Yennefer of Vengerberg (Anya Chalotra), and Ciri (Freya Allan) by following them separately in different places and points in time, with their paths converging towards the end of the season. The Witcher season 2 opted for a linear narrative and saw Ciri being trained at Kaer Morhen by other witchers while Geralt did his best to keep her and everyone else safe. Meanwhile, Yennefer dealt with the loss of her powers, which led her to make a deal with the Voleth Meir that put Ciri in great danger. Ultimately, Yennefer had a change of heart and saved Ciri from the Voleth Meir, but that doesn’t mean the princess of Cintra is now safe.

Related: Does Ciri Become A Witcher? What Happens In The Books & Game

Since season 1, Ciri has been on the run after the Nilfgaardian army attacked Cintra and killed her grandparents, and in The Witcher season 2, Nilfgaard continued looking for her everywhere, but as the season progressed, more enemies were added to the list as Ciri is more special than she thought, all thanks to her Elder blood and her mysterious powers. Ciri will be in great danger in The Witcher season 3 as some dangerous groups are now going after her for different reasons, and here’s everyone hunting Ciri in season 3 and why.

Nilfgaard’s motivations to capture Ciri weren’t clear until the final episode of The Witcher season 2, where the true identity of The White Flame, Nilfgaard’s emperor, was revealed. The White Flame is Emhyr van Emries, best known as Lord Urcheon “Duny” of Erlenwald, husband of princess Pavetta and father of Ciri. Emhyr was bound to Pavetta through the Law of Surprise, and in a full circle moment, so were Geralt and Ciri after the witcher saved Duny’s life. Some time after Ciri’s birth, and after learning about the prophecy of Ithlinne from Vilgefortz, Emhyr decided to return to Nilfgaard and reclaim the throne with Ciri by his side, but as Queen Calanthe kept a close eye on him, Emhyr and Vilgefortz came up with a plan to fake his, Pavetta’s, and Ciri’s deaths. However, Pavetta learned about the plan and smuggled Ciri out of their ship before it sailed away, thus saving her. An argument between Emhyr and Pavetta led the former to push the latter overboard, and he went on with his plan of faking his death as Duny to return to Nilfgaard, overthrowing the Usurper and earning the nickname “The White Flame Dancing on the Barrows of his Enemies” after he had his dead political enemies disinterred and used their gravestones to pave his ballroom.

Now, the reason why The White Flame is going after Ciri is quite controversial. Emhyr is a firm believer of the prophecy, which claims that his son will inherit the Elder Blood and rule the Continent – Ciri has Elder Blood, which grants her powers and also links her to the elves. Emhyr wants to capture his daughter so she can bear his child, as the prophecy says that child will be the ruler of the world. This is one of the most controversial stories in The Witcher, and it’s to be seen if the Netflix series will adapt it as it is or if it will make significant changes to it.

The Witcher season 2 went deeper into the lifestyle of the elves and their many struggles through Francesca Findabair (Mecia Simson), an elven sorceress. At the time Netflix’s The Witcher is set, the elves are hated by everyone on the Continent, all because of their complex backstory. Elves believe that they were created, unlike humans who evolved, so they consider humans to be inferior and constantly look down upon them, and even though at one point they were the oppressed race, they also massacred and butchered humans in ways that, when Geralt’s crew saw that they did, almost made them throw up. By the time of the events of The Witcher season 2, the elves were in the process of rebuilding their community and finding a permanent home, which led Francesca to make a deal with Fringilla and the Voleth Meir that ended in tragedy.

Related: The Witcher: Why The Elves Struggle To Have Babies

Francesca successfully gave birth to the first elven baby in a long, long time, but her baby was killed under The White Flame’s orders, leading her and her people to end their deal with Nilfgaard and leave. At the end of The Witcher season 2, Francesca learned from Istredd about Ciri and her Elder Blood. Francesca’s interpretation of the above-mentioned prophecy is that Ciri will be the one who will save the elves, and so she and her people are now looking for her too.

The Brotherhood of Sorcerers

Another group joining the hunt for Ciri in The Witcher season 3 is The Brotherhood of Sorcerers. Tissaia de Vries (MyAnna Buring) learned through Triss Merigold (Anna Shaffer), who was brought to Kaer Morhen by Geralt to help Ciri, that the young princess has Elder Blood, and following their interpretation of the prophecy, this meant Ciri has the power to save or destroy the world. Although Triss asked her to keep this information to herself, Tissaia shared it with Vilgefortz, who decided they had to come up with a plan to get to Ciri before she fell into the enemy’s hands, as he saw potential in her to end all war. Tissaia revealed that Ciri is alive and accompanied by a witcher to the Northern Kings and Queens of the Continent, and when Meve pointed out that Ciri created less trouble when believed to be dead, they authorized a bounty on Ciri and anyone protecting her.

Lydia van Bredevoort (Aisha Fabienne Ross) is a sorceress working for a mysterious employer who tasked her with finding Ciri, and in order to get to her fast, she sought assistance from Rience (Chris Fulton), a renegade mage who uses the forbidden practice of fire magic. Rience managed to steal a vial with the new witcher mutagen containing Ciri’s blood and used it to negotiate with Lydia, asking to meet her employer. Rience failed to capture Ciri as she escaped with Yennefer through a portal, and as he didn’t get to meet Lydia’s employer, he allowed her to run tests on the contents of the vial. However, Lydia’s blood tracing ritual left her disfigured and scarred, and The Witcher season 2 left Lydia and Rience discussing their plans to capture Ciri.

The biggest and most dangerous addition to the list of enemies hunting Ciri in The Witcher season 3 is The Wild Hunt, also known as Wraiths of Mörhogg. This is a group of specters who gallop through the sky on undead horses and are seen as an omen of war, and they were Aen Elle elves from Tir ná Lia. Under the orders of elven King Auberon Muircetach, these elves formed a cavalry unit with the purpose of invading alien worlds and capturing young humanoids to use them as slaves, and they did this through the Gate of the Worlds. To look more threatening, the Wild Hunt wore skeletal armor and used projections to look more spectral, but at one point, the elves lost their access to space-time travel through the Gate and recovered it partially, leading them to change their tactics and enhance their spectral projections, earning the name of “Wild Hunt”. Once they learned about Ciri and her Elder Blood, their plans changed and so they wanted to capture her so she could mate with their king, so they could reintroduce Elder Blood to the elves through their child, thus regaining power and access to the Gate. However, their plan changed when their king was unable to perform and was killed, and the new ruler chose to harness power from Ciri instead and with that reopen the Gate. This is one of the most controversial storylines in The Witcher, and just like the one with The White Flame, it’s to be seen if the Netflix series will change it a bit.

Cha Eun Woo Is The Best At Keeping Beauty Secrets