Home Entertainment The Witcher 3 Rides And Fights Geralt In His First Steam Deck... 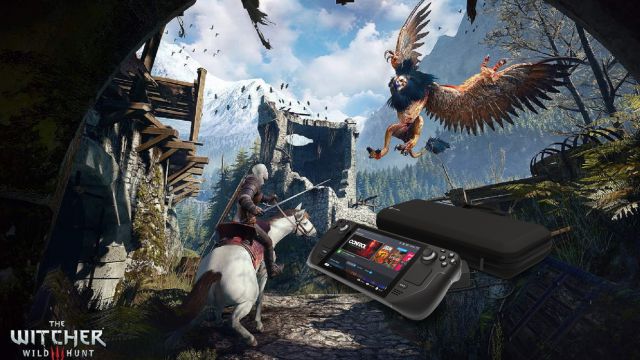 The Witcher 3: CD Projekt RED shows the game in motion in a series of hands-on videos with Valve’s portable machine. Steam Deck still has a few months to go to reach the homes of the first consumers, but Valve has already put in place the promotional machinery. The North American company has just shown the entrails of the console in a video posted on its YouTube channel. Meanwhile, the studios have received their respective units. CD Projekt Red, creators of Cyberpunk 2077, have shown The Witcher 3: Wild Hunt running on the device

“Open a portal to the world and play The Witcher 3: Wild Hunt anywhere when Steam Deck goes on sale,” says the developer on the game’s official Twitter channel. “Take a look at the footage of the current generation version running on a Steam Deck.” The Poles have deployed a thread of tweets with several hands-on videos, in which we can see Geralt of Rivia riding and fighting terrible monsters.

Next-gen version of The Witcher on the way

CD Projekt RED refers to the previous generation version because the company is preparing an improved edition for Xbox Series X, Xbox Series S and PS5. The update is in the hands of Saber Interactive and will be free for anyone who already owns the game. Like the next-gen version of Cyberpunk 2077, its launch is scheduled to occur sometime in the current year 2021. However, CD Projekt does not guarantee this date, so it could be delayed.

Steam Deck hides a PC hardware inside. In fact, it is possible to connect it to a monitor and use it as if it were a desktop computer. In principle, Valve maintains that the entire current Steam library will be compatible with the machine when it goes on sale. It will be sold by reservation and in different waves, depending on when the reservation was made.