Home Entertainment The Witcher 3 For PS5 And Xbox Series Reaffirms Its 2022 Release... 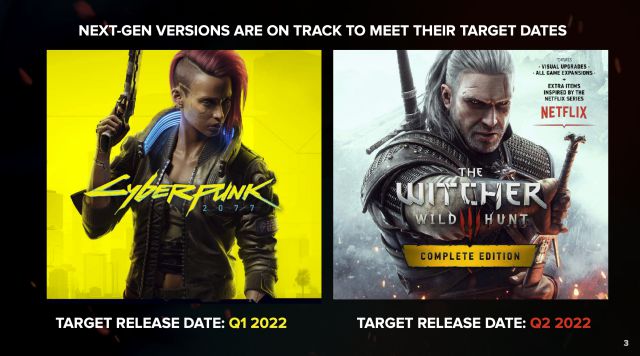 The Witcher 3: Players of the new consoles will be able to upgrade to next gen versions at no cost. CD Projekt RED continues to work to meet deadlines. The Witcher 3: Wild Hunt will arrive on PlayStation 5 and Xbox Series X | S with its renewed appearance for Geralt of Rivia sometime in the second quarter of 2022. CD Projekt RED has presented its financial results for the third quarter of 2021 on Monday in a meeting where they have explained to their investors what they have planned for the immediate future and how they will manage all their human capital to work not only on the expansion of Cyberpunk 2077, but also on the next gen versions of Cyberpunk 2077 and Geralt’s adventure from Rivia, which maintain their launch windows in 2022.

On the one hand, Cyberpunk 2077 will be released on PS5 and Xbox Series (at no additional cost to buyers of the game on PS4 and Xbox One) throughout the first quarter of 2022; For its part, The Witcher 3: Wild Hunt will land on the new Sony and Microsoft machines between the months of April and June, during the second quarter. A long way from the premiere of the second season of the Netflix series, which arrives in December. The original plan was to publish both new generation versions at the end of 2021.

As promised in September 2020, those who have The Witcher 3: Wild Hunt on PlayStation 4, Xbox One and PC (Steam, Epic Games Store and GOG) will be able to update totally free to this next generation version of the acclaimed title.

It should be noted that this improved new edition of the game will also be sold independently for PS5, Xbox Series X | S and PC through the Complete Edition, which includes the two DLC in the form of expansions. Likewise, it will have visual improvements and new techniques that will take advantage of the current hardware; including reduced loading times thanks to SSD memories and ray tracing.

The latest incentive of the next gen version of The Witcher 3 is that it will not only include the two original expansions that we saw a few years ago, but also new DLC based on The Witcher television series, whose first season was an absolute hit on Netflix. .

The Witcher 3: Wild Hunt is currently available for PS4, Xbox One, PC, Nintendo Switch, and Google Stadia. The Complete Edition version includes the base game, Hearts of Stone, Blood & Wine expansions, and 16 DLCs.

Fortnite: A Guide to the Location of All Durrrburger Relics