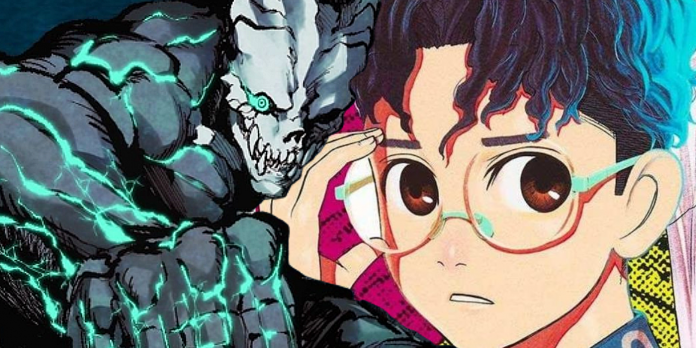 Warning! There are spoilers ahead for the 66th chapter of Dandadan!

Kaiju No. 8 is not the only manga from the additional digital edition of Shonen Jump MANGA Plus that features kaiju, as mangaka Yukinobu Tatsu has just added these monsters to the already extensive repertoire of species of his wild Dandadan series.

Dandadan was already supposed to be absolutely incredible after the series debuted, since two completely different races, Youkai and aliens, immediately joined together in the first chapter. However, apart from a few friendly aliens, Dandadan has spent most of the last chapters introducing many different types of youkai, as opposed to hostile aliens, while maintaining the relatively restrained world of Dandadan, although the boundaries of which still remain completely ridiculous. Despite this, Tatsu usually helps readers immerse themselves in his strange world when things get even stranger. For example, despite the fact that he recently introduced another species from Earth, other than the Youkai, called the Underground, he portrayed them as strange and overly strong people in order to at least prepare everyone for what was about to happen. Tatsu also tried to bring order to his chaos. One of the main characters of Dandadan has already put forward a promising theory explaining why there are so many aliens and Youkai in his story.

But now, in chapter 66, Dandadan not only presented a view that no one expected, but also a kaiju from outer space. What makes kaiju so otherworldly is that the sky turns black, and all other life, except for those with yokai abilities, temporarily disappears as soon as the creature begins to run amok. Like most aliens, this kaiju is hostile and, of course, somehow connected to one of the aspects of the R-rated Dandadan in the series.

Since the arrival of Dandadan’s first alien species, Serpo, most of the new otherworldly creatures are brainless rather than intelligent, including the titan-like blockhead, the Flatwood Monster, and Nessie. These aliens are also somehow connected to the Serpo, and do not represent another sect. In fact, even the cute Dover Demon, who is now an ally of the Dandadan heroes, started out as a freelance Serpo fighter. Although this new kaiju looks more like a Flatwood monster, the fact that it is actually a kaiju sets it apart from the rest. Since the time of Godzilla, Japanese pop culture has been heavily influenced by Kaiju, so the appearance of such a creature seems right. Moreover, in one of the most promising new manga, these monsters are so predominant that their kind is even mentioned in the title, Kaiju No. 8. But what distinguishes Dandadan Kaiju from Kaiju No. 8 is that this one does not fit from Earth, because most of them do. In fact, most of the Kaijus in Godzilla started out as ordinary animals that eventually mutated due to being exposed to radiation on Earth. The fact that this new kaiju is from another planet gives this image, common in Japanese fiction, a funny twist, a development that turned out to be very characteristic of Dandadan.

Interestingly, many fans of the chapter are already calling for the appearance of an Ultraman, a titled alien from a Japanese show who began protecting Earth from Kaiju since he chased a monster known as Bemular there. Just based on how far Dandadan has come lately, it wouldn’t be a big exaggeration to assume that a character like an Ultraman might accidentally appear to save the day. The heroes of Earth definitely need something, as they have already proved that they cannot compare with the rampaging alien Kaiju. Why not continue to make more fun turns?

Is Project L a free game?