Home Entertainment The wild ending of the fifth season of “Cobra Kai” should worry... 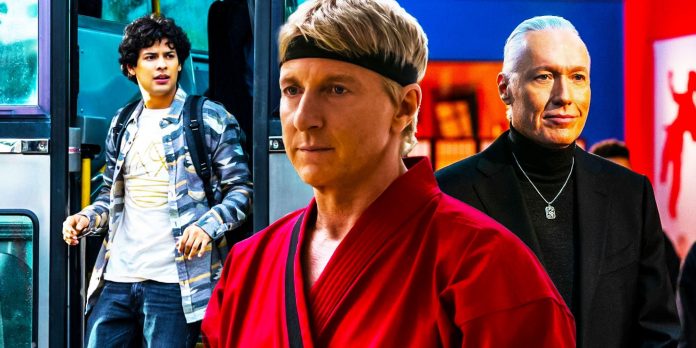 In a new Q&A thread from co-creator and Cobra Kai showrunner John Hurwitz teased an “absolutely wild” ending that is sure to make viewers very worried. Since its debut on YouTube in 2018 and the switch to Netflix in 2020, the Karate Kid sequel series has amassed an incredible fan base. Although the show originally began as a nostalgic modern retelling of the popular 1984 film Karate Kid, in which Johnny Lawrence rediscovered the Cobra Kai Dojo after more than 30 years, the premise has undergone radical changes as new and old characters are introduced to the series amid many dizzying plot twists.

After the fateful finale of the fourth season, viewers saw how Cobra Kai won the All-Valley Karate Championship among boys under 18 for the second year in a row, putting an end to the competing Eagle Fang Karate dojo run by Johnny Lawrence and Miyagi- Do Karate under the leadership of Daniel LaRusso. In the fifth season of Cobra Kai, Chozen, Daniel’s former rival turned friend from Karate Kid Part 2, will return when they join forces to defeat Cobra Kai once and for all. Terry Silver will complete his mission from Karate Kid, Part III, to open the Cobra Kai dojo throughout the San Fernando Valley. After Silver framed his old partner John Creese for attacking Stingray, nothing stands in his way anymore. Season 5 of Cobra Kai promises to be the biggest season.

One of the biggest questions that viewers are worried about right now is how much crazier the show will become. It has already been established that both John Creese and Terry Silver will be in the fifth season of Cobra Kai, the last of which was shown in the trailer footage. It is currently unknown if Mike Barnes will return to Cobra Kai and its upcoming fifth season to help Silver. While the creators of Cobra Kai won’t confirm or deny Barnes’ return, Silver tells Crease that he can “dig up one or two old friends” to help while Crease deals with his upcoming legal issues, implying that Barnes and possibly his henchmen Snake and Dennis can come back to help. The show is known to tease with the return of major characters like Silver and Ali Mills, so a serious tease like Barnes’ return can really shake things up.

Although it may be interesting to see what will happen in the fifth season of Cobra Kai, there have already been two tournaments in the series, and the main storyline in the upcoming season will be Miguel from Cobra Kai in Mexico, who is looking for his father. Even the death of the main character is possible. As many of these potential plot points come together in the new season, the overall storyline may seem somewhat exaggerated and not focus on the big picture, which is the discovery of more Cobra Kai dojo. While it’s possible to expect people to get hurt, as Hurwitz teased, it’s hard to see where the story will go in a potential sixth season if season five gets too big.

A lot of surprises can be expected in the new season of Cobra Kai, as we see the damage that more Cobra Kai dojos can do to the Valley. After learning that Silver bribed the referee to let her win the tournament, Tori from Cobra Kai will have to make an important decision that can become a really interesting character for her. Silver is also likely to brainwash more students like Kenny into being more aggressive than they really are. Only time will tell what to expect from the fifth season of “Cobra Kai” and beyond, but viewers can expect an incredibly exciting new season.