Home Entertainment The Webb Telescope shows us the heart of the “ghost galaxy” in... 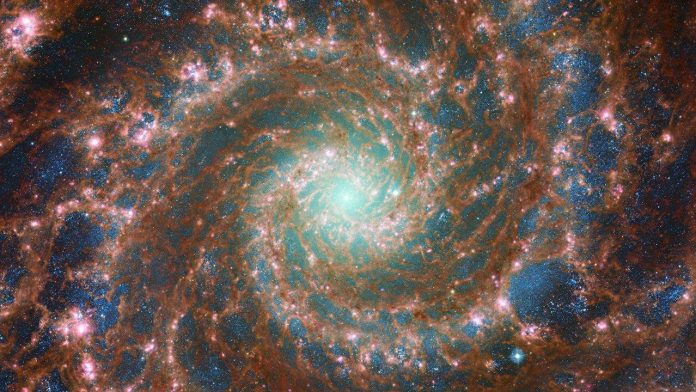 The James Webb Space Telescope (JWST) captured a stunning view of the heart of a huge Ghost Galaxy, officially known as M74, which is located 32 million light-years from Earth in the constellation Pisces.

This latest cosmic artwork from JWST is a perfect example of how data collected by multiple orbiting telescopes designed to observe light at different wavelengths can be combined to create a more complete and impressive image of an astronomical object.

The new JWST image was obtained using the Mid-InfraRed Instrument (MIRI) telescope, which is designed to observe light existing in the infrared part of the electromagnetic spectrum.

Normally our human eyes would be unable to perceive such light. However, astronomers can take the raw infrared data collected by telescopes and instruments like MIRI and assign them colors that we can understand.

This is useful because galaxies such as M74 are saturated with huge clouds of interstellar dust and gas, which do not allow telescopes observing the sky in the visible part of the electromagnetic spectrum to see its basic structure.

Fortunately, infrared telescopes like JWST can peer beyond this shading layer to see what’s underneath to provide a more complete view of the universe.

In the case of the Phantom Galaxy, Webb’s powerful infrared eyes revealed an ethereal image of filaments of dust and gas lying in the well-defined spiral arms of M74, and a clear central region in which there is a dense cluster of stellar bodies.

Meanwhile, previous observations made by the Hubble Space Telescope have demonstrated the galaxy in the ultraviolet and visible parts of the light spectrum. Hubble data revealed a central population of old red stars and the location of younger bluish stellar bodies that adorn the spiral arms.

The red regions of gas scattered throughout the structure represented areas of intense star formation, where light emanating from powerful young stars energized the surrounding clouds, causing them to glow.

Scientists have managed to combine Webb and Hubble data to create a truly impressive image of the Phantom galaxy. Here, the JWST data is colored red to indicate a mass of dust woven into the galactic structure, with orange regions representing hotter regions of matter. Meanwhile, young stellar bodies are represented in blue, and their older counterparts are shown in blue/green shades.

With Webb’s new data, astronomers will try to shed light on the processes that controlled star formation in the early universe, and find out the age and mass of ancient star clusters.