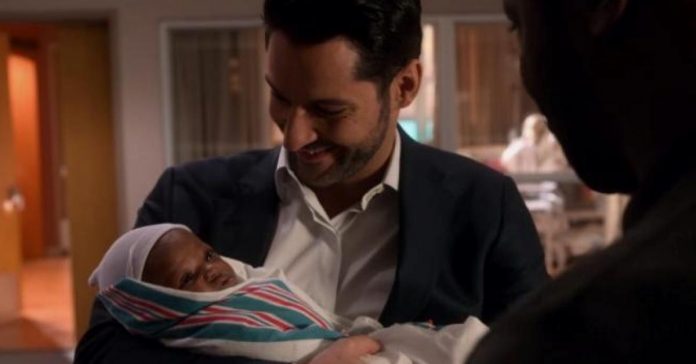 The streaming platform Netflix must deliver Lucifer season 5B to fans of the diabolical drama, which is expected to arrive sometime in 2021.

As you all know, Lucifer will come to an end after season 6 hits viewer screens. Production on the latest installment continues as fans await the arrival of the second wave of season 5 episodes.

In the Netflix series, fans have witnessed the romance between Lucifer Morningstar (TomEllis) and his beloved Chloe Decker played by Lauren German, whose partner would be interesting to see the formation of a family.

However, something disturbing that keeps fans of the series extremely concerned, is whether the king of darkness can have children as an immortal angel. A question that many have asked, for which a theory was generated.

In this sense, some have questioned that a supernatural being like Lucifer can have the same capabilities as humans to reproduce biologically. Others have said there are no reasons why he shouldn’t have them.

According to the mythology of the Netflix series, it seems that angels can procreate with humans. One example of this was when Lucifer’s brother Amenadiel (DB Woodside) became the father of baby Charlie with Linda Martin (Rachael Harris).

Although Lucifer may have children, the devil seems not to be very attracted to children. However, the opposite happens in children who are generally attracted to it.

In the series it has been seen that Lucifer discovered that baby Charlie adores his devil face, while Trixie Espinoza (Scarlett Estevez) Chloe’s daughter has always wanted to be his friend.

See Also
Lucifer: Rumors that the cast is not in good condition

In this regard, fans remain hopeful that before the series comes to an end, Lucifer can conclude the story of him united alongside his family, including at least one son.

In this regard, when Tom Ellis was asked during an interview with Entertainment Tonight in 2019, if a baby between Lucifer and Chloe could be on the way in the drama, the actor stated the following:

“All of these things could happen. Lucifer told Amenadiel that it is really surprising that he didn’t get anyone pregnant. If the father (Dennis Haysbert) blesses him, then maybe. ”

And is that for Lucifer Morningstar to have children, fans said that the devil would have to become mortal first, based on what happened with Amenadiel. This was said by a fan of the show on reddit:

“When Amenadiel tells Luci that Linda is pregnant, Luci says that Amenadiel must have become more deadly than they thought. Amenadiel lost his wings and his power to stop time during that moment (and evidently his strength, since Uriel was able to defeat him) ”.

“Even though Luci is vulnerable / can get hurt being around Chloe, he still has his wings and his ‘wish’ power, and we’ve seen him use his angel strength around him, so does he really turn deadly, or just vulnerable? ”

“I feel like he would have to lose his wings and / or power and / or strength to be deadly enough to get Chloe pregnant (if we’re using Amenadiel as a model).”

Coronavirus: Drake has passed the test and it is negative