Home Entertainment The Walking Dead: This is the new type of zombies that joins... 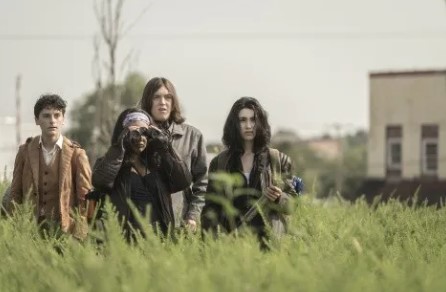 The Walking Dead will return next year. The original zombie drama that airs on the AMC television network will be back on fan screens in late February when the first of eight episodes of the second third of season 11 airs as scheduled. . A delivery that is eagerly awaited by viewers, who have just learned about the new revelations of this universe, with the end of The Walking Dead: World Beyond. (Spoilers for the final episode of the spinoff series)

As fans know, The Walking Dead: World Beyond concluded last Sunday with the tenth episode of season 2 titled “The Last Light”, which was making big reveals that gave a twist to the way the universe looks. zombie created by Robert Kirkman and directed by Chief Content Officer Scott Gimple.

It is important to note that during the end of World Beyond an iconic character appeared that was an important part of the final two episodes of the first season of The Walking Dead. Dr. Edwin Jenner could be seen through a prerecorded video that was dusted off by a French researcher, ten years after the events that occurred when this character had contact with the laboratory in France, the place where the virus was created, such as it was revealed at the conclusion of the spinoff drama last Sunday.

During the final minutes of World Beyond, a man armed with a gun approached the French doctor asking her about the whereabouts of Team Primrose, the group of researchers who made the virus worse while trying to find a cure (this revelation was made by Dr. Jenner in the final episode of The Walking Dead season 1). Although she belonged to the Violet team, hers also shot her by taking her life, accusing her of being guilty of everything that was happening.

But, the surprise of this Sunday night in the final episode of The Walking Dead: World Beyond, was when the dead investigator, it took only a minute to revive and become the new zombie, quickly getting to her feet and running towards the exit. to hit the steel door with brutal force never seen in the walkers fans are used to seeing in The Walking Dead universe.

The new zombie in The Walking Dead, now has unusual strength, is stronger and shows rage while punching and making guttural sounds. Without a doubt, with this the franchise is giving a sample of progress and a great turn in the history of the walkers from this moment, since now they run quickly. It only remains to be seen if this new zombie idea will be included in the remaining two-thirds of The Walking Dead season 11 when it returns on February 20, 2022 or in Fear the Walking Dead season 7 which will premiere on April 17. of the next year.

The first demonstration of Disney and Marvel games will take place...

Why fans of “Welcome to Plattville” say that the series is...