Home Entertainment The Walking Dead: The most memorable quote from each season 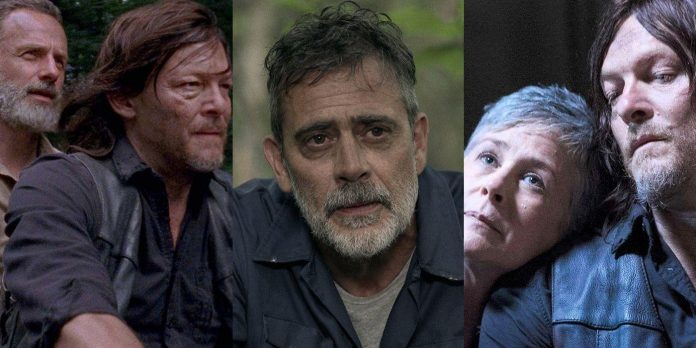 With the original Walking Dead TV show set to conclude its run with an extended eleventh season, many fans are taking the time to look back at the show’s history, particularly when it comes to character development. These individuals have had a lot to do and say over the years, with many of their best quotes on The Walking Dead making their way into the pop culture zeitgeist.

These are the words that were uttered during times of despair, triumph, and conflict. Some were hopeful and optimistic, while others were brutal and nihilistic. Each one has a deeper and more powerful meaning that goes far beyond just simple words. Some of these quotes would have massive ramifications for the characters as the seasons went on.

Updated on July 20, 2022, by Shawn S. Lealos:  The original series of The Walking Dead is nearing its conclusion and while there are spinoffs currently airing and more coming in the future, this will mark the end of the road for characters that fans have fallen in love with over the last 11 seasons. However, while the show will end, the memories will remain and this is especially important when it comes to the special moments that came when they sat down and opened their hearts to one another. These are the quotes that made characters into legends, opened up the survivors to take actions that would change the world, and break the hearts of fans who watched their beloved favorites live and die as the new world took shape.

A tense conversation between Maggie and Negan led to some startling revelations about the latter, especially since many Walking Dead fans believed that Negan was on the straight and narrow path. He may still be, but his candidness caught some off guard when the two reminisced about Negan killing Glenn.

Maggie was curious to know if Negan would have changed his mind if given the chance to do it all over again. Negan confirmed it, but he didn’t give her the answer she was expecting. It’s possible that Negan was simply being pragmatic about the risks vs. rewards of keeping them alive, but it could also be taken another, more ominous way.

“We Are The End Of The World.”

In Season 10, the notably more evil Whisperers repeat this fatalistic mantra, which gave some insight into their ideology. It was a form of pseudo-religion that focused on a particular nihilistic point of view – survival at any cost while embracing the world of the undead.

While the Whisperers viewed the zombie apocalypse as the end of the world, this viewpoint stood in direct contrast to how the survivors saw it – a chance to build something new. In the end, both sides had taken a very different path when it came to surviving, and it led headfirst into one of the most brutal battles of The Walking Dead.

“It’s Human Nature To Come Together.”

Rick Gets Through To Daryl (S9 E1)

In season 9, Rick spoke about human nature and the fact that people always come together – even at the end of the world. This quote has a magnificent aura of truth around it, whether it’s a large-scale catastrophe or a smaller-scale problem where communities come together to assist one another.

When things are at their worst, people are at their worst. However, they can also be at their best, demonstrating heroism and solidarity with one another. It’s true that Rick and his crew did some awful things during their time, but they also did a lot of good and saved many lives.

“My Mercy Prevails Over My Wrath.”

After the death of his son Carl, Rick goes from wanting to kill Negan to showing him mercy. Rather than offing the notorious antagonist, Rick locks him away in a cell in Alexandria before uttering this popular line. It would prove to have the biggest impact on the characters as they moved forward.

The natural impulse for the survivors (and the audience) would be to exact revenge on Negan for his actions, but Rick chose another path. He brought civility back when he had every justification to go the opposite direction. He made the choice to stop the killing and set an example.

One of The Walking Dead’s most infamous moments came in the much-anticipated season 7 premiere, “The Day Will Come When You Won’t Be.” After Negan bludgeoned Abraham to death with a baseball bat, he shocked the audience by offing Glenn as well, right in front of his wife, Maggie.

This gut-wrenching Walking Dead death scene changed things forever. Glenn’s last words were mumbled to Maggie after he took a traumatic blow to the head, while she looked on in horror. It was a terribly tragic and irrefutably traumatic moment for both Maggie and the audience.

“Someday This Pain Will Be Useful To You.”

Deanna Monroe, the original leader of Alexandria, met her demise in the midseason finale “Start to Finish.” On her deathbed, she mutters the phrase “Dolor hic tibi proderit olim,” which translates roughly as “Someday this pain will be useful to you.”

The overall arching theme of the phrase refers to the need for people to endure the hardest moments of life and emerge intact on the other side. Pain can be used as a motivator for good deeds to shock people out of apathy or give them the boost they need to fight for a better tomorrow.

“Everything Now… Just Consumes You.”

Carol Breaks Down To Daryl (S5.E6)

In the season 5 episode “Consumed,” Daryl and Carol go on a rescue mission to find Beth, who was kidnapped by the folks at Grady Memorial Hospital at the end of Season 4. This episode offers an insight into their characters’ mindsets, specifically Carol, who memorably delivers this sad line.

With everything that Carol had been through up to that point, including the death of her own daughter in the most horrific manner possible, it was understandable. Carol could barely make it through another day without each tragedy compounding on top of the others, eating away at her resolve in the process.

“Look At The Flowers.”

One of The Walking Dead’s most memorable episodes was also one of its most disturbing. That is, of course, the unforgettable season 4 episode, “The Grove.” This bottle episode revolved around Tyreese and Carol, who meet up after the fall of the prison and are tasked with looking after the Samuel sisters, Lizzie and Mika, and baby Judith Grimes.

“The Grove” is easily one of the show’s best episodes, and it’s also likely the most tragic thing that ever happened to Carol, who was forced to put Lizzie down after the girl murdered her own sister. This was the origin of the now-infamous “Look at the flowers” line, a haunting and traumatic trigger moment for fans of the show. It proved that Carol was one of the few Walking Dead characters to make true sacrifices for the good of the group.

Lori Grimes’s death in season 3 was a surreal event. The character had one of the most tragic Walking Dead backstories, but hope remained that she would last for the long haul in the TV show. In season 3’s fourth episode “Killer Within,” Lori goes into labor with Judith in the midst of chaos.

Maggie has to perform an emergency C-section and deliver Judith. Lori presumably dies of blood loss, and Carl is left to put her down. Before she passes away, Lori’s memorable last words to Carl are simply “Goodnight, love.” It would forever change the trajectory of both Carl and his father, Rick.

“The Pain Doesn’t Go Away; You Just Make Room For It.”

Andrea was introduced in the series’ inaugural season and was a major character up until her death in the season 3 finale. She made many impulsive and questionable decisions, particularly her talk with young Beth Greene in season 2.

It ended up having the desired effect, steering Beth away from taking her own life. The lesson was an important and poignant one for the rest of the characters who all suffered trauma and loss, yet they were encouraged to soldier on in the hopes of a better tomorrow.

“I Like What The Father Said To His Son…”

Dale Horvath was The Walking Dead’s original moral compass. He was a well-meaning, kind-to-a-fault survivor who always seemed to have nuggets of wisdom to offer his fellow survivors. Dale’s first memorable story came in The Walking Dead’s fourth-ever episode, “Vatos” when he quotes William Faulkner.

The quote in question reads: “I give you the mausoleum of all hope and desire, which will fit your individual needs no better than it did mine, or my father’s before me. I give it to you, not that you may remember time, but that you may forget it for a moment, now and then, and not spend all of your breath trying to conquer it.”