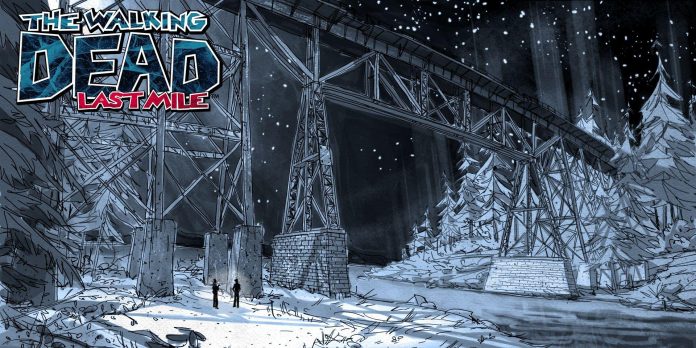 The new game “The Walking Dead: The Last Mile” is designed to create a unique new gameplay in which players will determine the outcome of live events every week. Skybound Entertainment first announced the new “Walking Dead” game earlier this year, calling it a large-scale interactive live event (abbreviated MILE), where players will be able to constantly shape the story of this new expansion of the “Walking Dead” canon and attend live broadcasts with an overview of the plot. Presenters Yvette Nicole Brown and Felicia Day. Screen Rant attended a special preview event organized by Genvid Entertainment publishing CEO Jacob Navoc and Skybound Creative Vice President Sean Kittelson.

The Walking Dead: Last Mile is a free game available through Facebook Gaming in which players will create and play for their survivors in a remote Alaska community. TWD: Last Mile introduces several new characters in the Walking Dead universe, whose fates will be determined by the choice that players vote for. Users can log in daily to perform various actions for which they will earn experience points, which, in turn, can be used to influence the history of the interactive experience. Publisher Genvid Entertainment has previously released other MILES such as Rival Peak and Pac-Man Community.

In order not to greatly affect the existing canon of “The Walking Dead”, “The Last Mile” takes place in a completely new Alaska environment. The event will be held for 4 months as the currently uncertain story unfolds, which will be built both with the participation of fans and under the guidance of the creator of “The Walking Dead” Robert Kirkman. Kittelson promises that fans will be involved in the story they expect from The Walking Dead series, including “characters who face morally difficult decisions and emotionally charged stories that are grounded.”

The action of “The Walking Dead: The Last Mile” takes place in the small coastal town of Prosper Landing, where a handful of survivors live, who will face new hordes of walkers and the harshest winter in Alaska in recent years. There are two main factions that players can help in the game: The Village, a group that focuses more on traditional methods of survival, and The Plant, a more technologically advanced group that decided to return a worn-out gas stabilization plant to the grid. Each faction is fighting for survival, and it lacks different supplies: there is a lot of fuel in the Factory, but there is not enough food, while in the Village everything is the opposite. Both sides have a leader, as well as several followers with different levels of loyalty, who will undoubtedly be tested by time.

When players create their survivor in The Walking Dead: The Last Mile, they join a faction and can choose between 12 different skills for their character. Once in the game, users will participate in a variety of different actions to help their faction and earn influence points for it. Each class has its own mini-game. For example, a Bejeweled style game with ammunition allows players to create bullets, and a Stardew Valley style fishing game allows players to collect food for their faction. Players can also send their survivors on missions while they are not actively playing the game, although riskier missions can potentially kill the user’s character.

Players will use their influence points in The Walking Dead: Last Mile to vote on plot decisions, both big and small, that will have a long-term impact on the world as a whole, creating a kind of large-scale version of the game in the style of Telltale. Every week, the decisions voted for the most win and are incorporated into the game’s plot, and Kittelson teased that some decisions may even affect episodes in a few weeks. Players can also make “episodic decisions”, which gives their characters the opportunity to participate in cinematic cutscenes. The developers gave an interesting look at how the possible offshoots of the story were outlined, and stated that much remains to be written, as it depends on what the players will do in the first weeks of the event.

Navok told how “The Walking Dead: The Last Mile” will offer players about 15 minutes of new content per day on various media. Players can complete tasks, as well as view new story clips, place bets on in-game solutions and communicate with other users during interactive live broadcasts. Yvette Nicole Brown and Felicia Day will host frequent live broadcasts of The Last Mile via Facebook Watch, which will briefly describe how the story unfolds, new cinematic videos based on key decisions will be shown, and special guests will be introduced who will discuss events with the hosts. Felicia Day will also host interactive broadcasts of TWD: Last Mile at certain times.

The game will have a permanent schedule: new live broadcasts of Walking Dead: Last Mile will take place every Monday, and sometimes on Fridays.

Parks and Recreation: Chris Traeger’s 10 Most Inspiring Quotes, According to...

What the hell is wrong with Thor: love and screaming goats...