Home Entertainment The Walking Dead: 10 main Characters and their biggest loss in the... 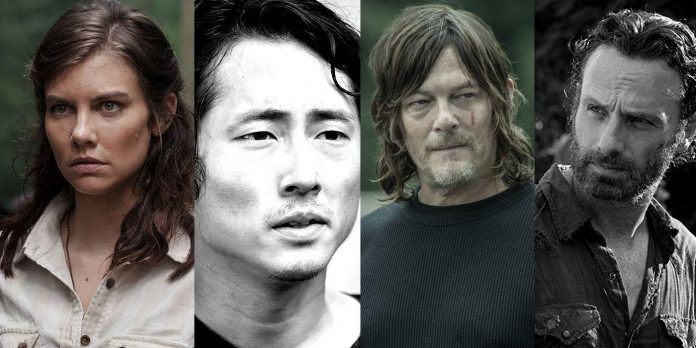 The Walking Dead is a TV series filled with tremendous tragedy and great loss. The show has become known for allowing none of its characters to remain safe, with even major protagonists meeting grim, violent, untimely ends.

Throughout The Walking Dead’s 11-season run, the only people more affected by the deaths than the audience are the characters who sustained the losses. With no one left unaffected by the rampant tragedy of a post-apocalyptic world, each of the series’ main characters has at least one loss that defines their story.

Jeffrey Dean Morgan joined The Walking Dead at the end of its sixth season as Negan, the villainous leader of the Saviors. After two seasons of all-out war between the Saviors and the Coalition of other surviving communities, Negan was defeated and imprisoned, eventually embarking on a years-long arc of redemption and repentance, during which the audience learns that he lost his wife early in the apocalypse.

Losing Lucille prior to his introduction to the series would inform much of Negan’s story arc thereafter, leading him to perform many of his villainous actions throughout the show. Negan would also go on to name his barbed-wire baseball bat Lucille after his late wife, growing an unhealthy attachment to the weapon as a result.

Danai Gurira’s Michonne is one of the most iconic characters in the series, whose iconic look and signature samurai sword make her distinct from the rest of the cast. While surviving in the series for seven years, Michonne has lost countless loved ones, but she sustained her greatest loss before the audience ever met her.

Michonne has some of the best character growth in The Walking Dead, much of which is placed in a new light at the revelation that she lost a baby son early in the apocalypse. This loss is what caused Michonne to wander alone with her walkers when the audience first meets her in Season 2, and what pushes her to find a family once more among Rick’s group of survivors.

Sasha Williams, who was portrayed by Sonequa Martin-Green, was a major character on The Walking Dead from its third season until her death in the season 7 finale. In the first three years of her tenure, however, Sasha was accompanied by her brother Tyreese (Chad L. Coleman) before his untimely passing halfway through Season 5.

The death of Tyreese, coupled with the recent death of Beth Greene, pushed Sasha to a breaking point, causing her to slowly become increasingly distant from the group. It would take falling in love with fellow Alexandrian Abraham for Sasha to reconnect with others once more, though that relationship was also doomed to a tragic end.

Christian Serratos’s Rosita Espinosa continues to be an integral member of the show’s main cast as the third and final part of Season 11 rapidly approaches. Since her introduction in Season 4, Rosita has embarked on numerous compelling storylines, the most recognizable of which included suffering the loss of Abraham Ford (Michael Cudlitz).

Though they had broken up by the time that Abraham was killed, he and Rosita had a long and storied history with one another, meeting long before their first appearance in Season 4. As turbulent as their relationship might have been, Rosita loved Abraham dearly and was devastated by his death, though she managed to move on and find love once more in the years thereafter.

King Ezekiel (Khary Payton) was introduced as a larger-than-life personality shortly after the introduction of the Savior storyline. As the leader of the Kingdom, his contributions over the last several seasons cannot be understated. But, after raising a son with Carol Peletier, Ezekiel was not prepared to suffer the sudden and brutal loss of a child.

Though not related by blood, Henry (Matt Lintz) was every bit Ezekiel and Carol’s son. Losing him would eventually drive the couple apart, forcing each parent to grieve his loss alone. Though Ezekiel has worked hard to honor Henry’s legacy in the time since his death, the once jovial king has lost much of the glimmer that had once been in his eyes.

Carl Grimes was a main cast member on The Walking Dead for its first eight seasons, who was always expected to be one of the show’s final survivors. He sustained his greatest loss early in the series after his mother died in giving birth to his younger sister, Judith.

Though many fans consider Lori to be one of The Walking Dead’s most irritating characters, her death was nevertheless tragic, especially for her son. Carl was understandably affected by the loss of his mother, spending the next few seasons acting out against his surviving parent. Carl would later reference his mother’s death in his letter to Judith as he prepared for his own imminent demise.

Melissa McBride’s Carol Peletier has been a mainstay of The Walking Dead for the entirety of its run, as one of only two characters to appear in all eleven seasons. Carol’s character was changed forever when, after several episodes of searching for her missing daughter, Sophia’s walker stumbled out of Hershel’s barn.

Sophia’s death shook Carol to her core, much in the same way it did the audience. Losing such a vital part of her life took Carol down a path that would result in her becoming one of the group’s greatest assets. Yet, the pain of her daughter’s loss would never truly leave Carol, as a string of lost children would haunt her for the rest of her days.

Norman Reedus’s Daryl Dixon is the standout fan favorite from the series and the new lead after Andrew Lincoln’s departure in Season 9. Daryl is one character on The Walking Dead who seems destined to survive the series, but such a fate portends that he himself will suffer great losses during his time surviving, including that of his dearest friend, Rick Grimes.

Daryl may have lost his biological brother, Merle (Michael Rooker), but the truly greatest loss of his life was that of Rick Grimes. Though their relationship may have gotten off to a rocky start, the two quickly became each other’s greatest ally and closest friend until they were tragically torn apart. Daryl would spend years searching for Rick, leaving fans to hope that they’ll see the two reunited somehow in the future.

Lauren Cohan’s Maggie Rhee was introduced in the show’s second season and quickly became a fan favorite as a result of her compelling love story with Glenn (Steven Yeun). After years of marriage, however, Maggie was forced to watch as her husband and father of her unborn baby was brutally murdered before her very eyes.

Maggie and Glenn’s relationship was a highlight of the show’s early years, resulting in Glenn’s death leaving a major hole in the series, and in Maggie, moving forward. Maggie would go on to use her grief to grow stronger, eventually becoming the leader of the Hilltop Community, though she would never be the same.

Andrew Lincoln portrayed Sherriff Rick Grimes for nine seasons of The Walking Dead, driving the narrative of the entire series during that time. As the leader of the show’s characters, Rick sustained numerous losses whilst trying to lead his friends through the apocalypse, but no loss proved greater than that of his beloved son, Carl.

From the very beginning, Rick fought to survive because of Carl. His son was the most important thing in his life and losing him was a greater pain than Rick had ever endured before. Nevertheless, Carl’s death motivated his father to do the unthinkable in offering a peaceful conclusion to the Savior War, allowing a stronger Coalition to be built in the aftermath.

Tesla delivered more than 250,000 electric vehicles in the second quarter